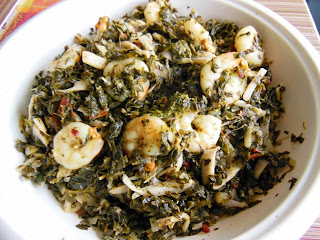 Chin Baung KyawRoselle leaves have red stems and grow on a bush. Stir-fried like spinach, roselle leaves have a distinctively tart and tangy flavor. In India the leaves of the roselle bush are called gongura and are cooked with lentils or pickled with spices called 'pachadi'. It is available in the Indian markets in North America under the label gongura. 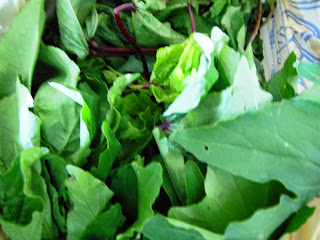 Roselle Leaves Gifted By A FriendIn Burmese cuisine, roselle leaves are called chin baung ywet or sour leaf. It is perhaps the most widely eaten and popular vegetable in Burma. The leaves are fried with garlic, dried or fresh prawns and green chili or cooked with fish. A light soup (hinjo)made from roselle leaves and dried shrimp is also a popular dish.

My husband was trying this for the first time and since the tart flavor can be a bit overwhelming, I combined it with some spinach.

Marinate shrimp in fish sauce and turmeric for 15 minutes and set aside.Heat oil over medium-high heat and fry garlic, onions and chilies until onions turn translucent.Add tomatoes and shrimp paste and stir-fry until tomatoes break down and oil resurfaces.Add roselle leaves and bamboo shoots, mix thoroughly and simmer over medium heat until roselle leaves are cooked and all liquid is absorbed.Add marinated shrimp and cook for another 5 minutes.Serve with steamed rice.