For dinner Monday night, I needed to make something that I could basically heat and eat and also be homemade. On Sunday, I decided to search through the freezer and cabinets for ingredient ideas. I found some chicken breasts on the bone and shredded coconut in the freezer and shitake mushrooms, water chestnuts, bamboo shoots, coconut milk and an onion in the pantry. I also had some 2 day old leftover garlic & onion bread and about a third of a carton of half-and-half and some mushrooms in the refrigerator. I then turned to my spices and came up with a chicken coconut casserole. 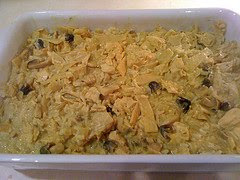 I boiled the chicken in water and seasoned it with salt and dried chilies. Then I removed all of the fat, bones and skin from the meat and cut up the meat into bite sized pieces. Next I chopped the onion and mushrooms. Then I heated up some vegetable oil in a large pot and added the onions; I also added 2 cloves of chopped garlic and cooked it until the onions were translucent.

Once the onions were cooked, I added spices (ginger, turmeric, fenugreek, Thai seasoning and salt), water chestnuts, bamboo shoots, shitake & white mushrooms, half-and-half, and coconut milk. Stirred it up well, let it just boil and then turned it down to simmer. Lastly, I added the cooked chicken and let the mixture simmer for about an hour.

While the chicken mixture was simmering, I made a cup of Thai Jasmine rice and cut up the leftover bread into small cubes. I preheated the oven to 350 and toasted the breadcrumbs & coconut for about 12-15 minutes.

When the rice was cooked and the breadcrumbs & coconut were toasted, I poured the chicken mixture and rice into a large casserole dish and added the topping. I then covered it up and put it in the refrigerator. 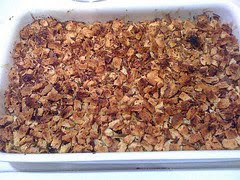 cooked
On Monday, I preheated the oven to 425 and cooked the casserole for 45 minutes. Dinner was served with brussel sprouts, Hawaii rolls and a nice glass of dry Riesling. It was very easy, I used up some staples and everyone like the coconut flavor of the dish!