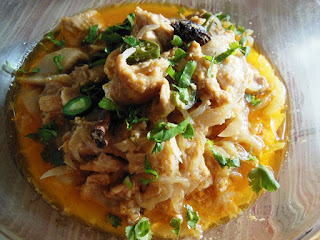 Chicken RezalaMum's Rezala was always delectable. She made it with bone-in chicken pieces that were fried until golden brown and then marinated in whipped yogurt. Her chicken rezala was succulent and delicious!

Mine is a lazy (wo)man's shortcut that still tastes very good. It involves massaging the yogurt marinade into the chicken and setting it aside for at least 30 minutes at room temperature. I prefer using Greek yogurt so that there is less chance that it will curdle during the cooking process. Adding a teaspoonful of cornstarch to the yogurt will thicken the gravy as the chicken simmers. Greek yogurt should be brought to room temperature before marinating.
A surprising twist to the traditional razaila recipe is to add ground white pepper. It adds a spicy heat and the white pepper keeps the gravy light-coloured and creamy.


Directions:
Whip yogurt with ginger & garlic paste, paprika, salt to taste, white pepper, cornstarch and diced green chilies.Marinate chicken pieces in yogurt mixture and set aside for 30 minutes.Heat oil and ghee in a skillet over medium-high heat and sputter shah jeera, cinnamon sticks, cardamoms.Add onions and stir-fry until onions turn translucent.Add chicken to skillet and leave untouched for 2-3 minutes so that one side can brown lightly.Flip chicken pieces over and leave untouched again for 2-3 minutes.Turn heat down to medium-low, stir chicken well, cover and simmer for 15 minutes.Adjust salt to taste and garnish with garam masala and cilantro.Remove from heat and serve as a main dish over rice or with naan/chapatis.