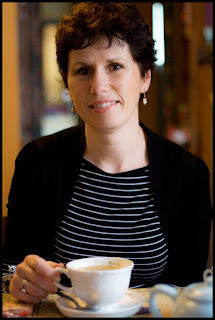 If you are interested in finding out more about local food and the culinary scene in Saskatchewan, a good place to start is with CJ Katz.

CJ publishes Savour Life, a weekly electronic newsletter about local living and eating. She is also the host of Wheatland Café, a weekly television cooking show (Wednesdays at 12:15 on CTV), and Savour Saskatchewan, a biweekly radio show talking to local food producers (every second Tuesday at 7:45 am on CBC Radio One with Sheila Coles).

Trial and Error
“I learned to cook through trial and error,” says CJ. As a 10-year old, CJ dabbled in cakes and cookies. She undertook more ambitious cooking projects after her parents divorced: “I visited my father, and he asked me to cook a pot roast.”
CJ doesn’t believe you need a degree to be a good cook, and her goal is to provide recipes that are quick, easy and accessible for people to cook at home.

Prairie Roots
Many of CJ’s recipes have strong Saskatchewan ties. A recent recipe showcases lingonberries from northern Saskatchewan.
CJ moved to Regina 8 years ago after having worked in Ottawa for 12 years and discovered the local food scene. “There were so many interesting things going on, “she says. “Why was nobody writing about this?”

CJ had been offering cooking classes in Regina, so she had a mailing list of about 50 people. She started sending out a small newsletter. As its popularity grew, she rebranded it as Savour Life and created a website. The newsletter now has 10,000 subscribers.
Multi MediaCJ had been writing a food column in a local newspaper and had done some television work while she was in Ottawa. This continued once she moved to Regina. She worked for the Regina Leader Post for a year and a half and was the culinary host on the weekend edition of CTV’s Good Morning Canada, which used to be aired out of Regina. Occasional radio appearances developed into a regular column.
CJ says that she enjoys all the different media formats. “It keeps it interesting,” she says. “I’m not sitting at my desk writing all day long.” She creates recipes for Wheatland Café and gets out in the field and talks to people for her radio spot. It also ensures that she is not reliant on a single source of income.
Cookbook
CJ’s newest project is a cookbook to be published by Canadian Plains Research. “It will have a strong Prairie focus,” she says. “I’ll use recipes from Wheatland Café, short paragraphs about producers and photographs of dishes or producers.”

Healthy Living
CJ is the Vice President of the Saskatchewan Triathlon Association Corporation. She has participated in one triathlon, but her primary role is as cheerleader and support for her sons. CJ says that triathlon started out as an adult sport but has progressed and now includes four and five year olds. “They think it’s hilarious and have so much fun,” she says.

“It’s all about healthy living and lifestyles,” she says. “It’s a good complement for what I’m doing.”