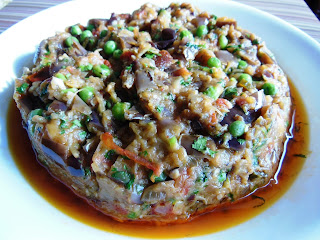 Slow-Cooked Begun BharthaI was first introduced to Baingan/Begun Bhartha while living in Defence Colony, a suburb of New Delhi in India. Around the corner from where we lived was a dhaba or roadside restaurant which are most often found on highways and the outskirts of cities, towns and villages. Dhabas serve Punjabi food and are frequented by truckers because the food is generally simple, rustic and cheap. My favourite dishes to order from our neghbourhood dhaba were Baingan Bhartha, Keema Mattar and Naan.

Begun or baingan is eggplant and bhartha refers to any vegetable that is roasted and mashed. Begun bhartha is the most common dish prepared in this way. The big and round eggplants are usually roasted over an unoon or charcoal stove. The charred skin is then removed, the pulp mashed and cooked with tomatoes, onions along with other ingredients on the stovetop. It's a rustic dish that requires a labour-intensive and time-consuming process.
This is where the crockpot, once again, comes to the rescue. I like Japaness eggplant which is diced along with all the other vegetables, dumped into the crockpot and allowed to cook on low without manual intervention for 3-4 hours. The resulting bhartha comes out looking like baba-ghanoush and tasting delicious!