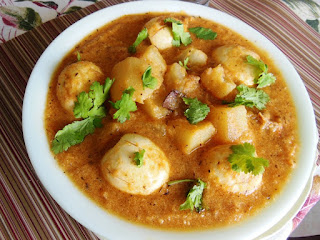 Dim'er KormaTaking the definition from Wikipedia, korma is a dish originating in the Indian subcontinent, consisting of meat or vegetables braised with yogurt/cream and spices to produce a thick sauce or glaze. I used evaporated milk instead of cream and cooked the eggs and potatoes long and slow over a low flame. Onions that are grated or blended into a paste tend to take a long time to cook enough to remove it's strong aroma. I read that blanching onions before blending takes care of this problem. A thick sauce is produced by adding simmering water when making the gravy. Somehow, cold water or broth added to simmering spices thins out the gravy, so make sure to keep a simmering cup or two of water/broth close at hand.
To make perfect hard-boiled eggs, bring the eggs to a rolling boil over medium heat, cover the saucepan and simmer for ten minutes. Turn off the heat and leave the eggs in the saucepan for another ten minutes. Drain the eggs and rinse under cold water then fill the saucepan with cold water and leave the eggs to cool down completely. They'll be easy to peel with no blemishes at all. Slit the eggs vertically four or five times to make sure the gravy penetrates to the core. Lightly fry the eggs until golden brown before releasing them into the gravy.
Ingredients6 eggs, hard-boiled and peeled2 large russet potatoes, cut in big chunks1 large onion, peeled & quartered & blanched1 large beefsteak tomato, blanched along with the onion and peeled1 Tbsp. raisins, also blanched1 tsp. ginger paste + 1 tsp. garlic paste + 1/2 tsp. Kashmiri mirch or paprika1/2 cup evaporated milk or heavy cream4 Tbsp. vegetable oil2 sticks cinnamon1 star anise1 large black cardamom, split1/2 tsp. garam masala1 Tbsp. birista/deep-fried onionsgreen chilies to taste, slicedcilantro, minced1 tsp. ghee
DirectionsIn a cup of boiling water, blanch onions, tomato & raisins.Drain, reserving the liquid for gravy in a later step.Peel skin from tomato & blend along with onions and raisins until smooth.Peel potatoes, cut in big chunks, par-boil for 10 minutes and drain.Vertically slit each egg 4-5 times and lightly fry to a golden brown.Keep reserved liquid from step 2 at a simmer.Heat oil over medium-high heat and sputter shah jeera/cumin seeds, cinnamon, star anise and cardamon.Add blended paste, ginger & garlic pastes, paprika and salt to taste.Stir-fry with potatoes until oil resurfaces and potatoes are cooked.Stir simmering blanching liquid into fried paste and add cream.Bring to a boil and add eggs along with birista and garam masala.Adjust salt to taste, simmer for 5 minutes, coating the eggs with gravy.Garnish with ghee, green chilies and cilantro.Serve over hot basmati rice or with tortillas/chapatis.