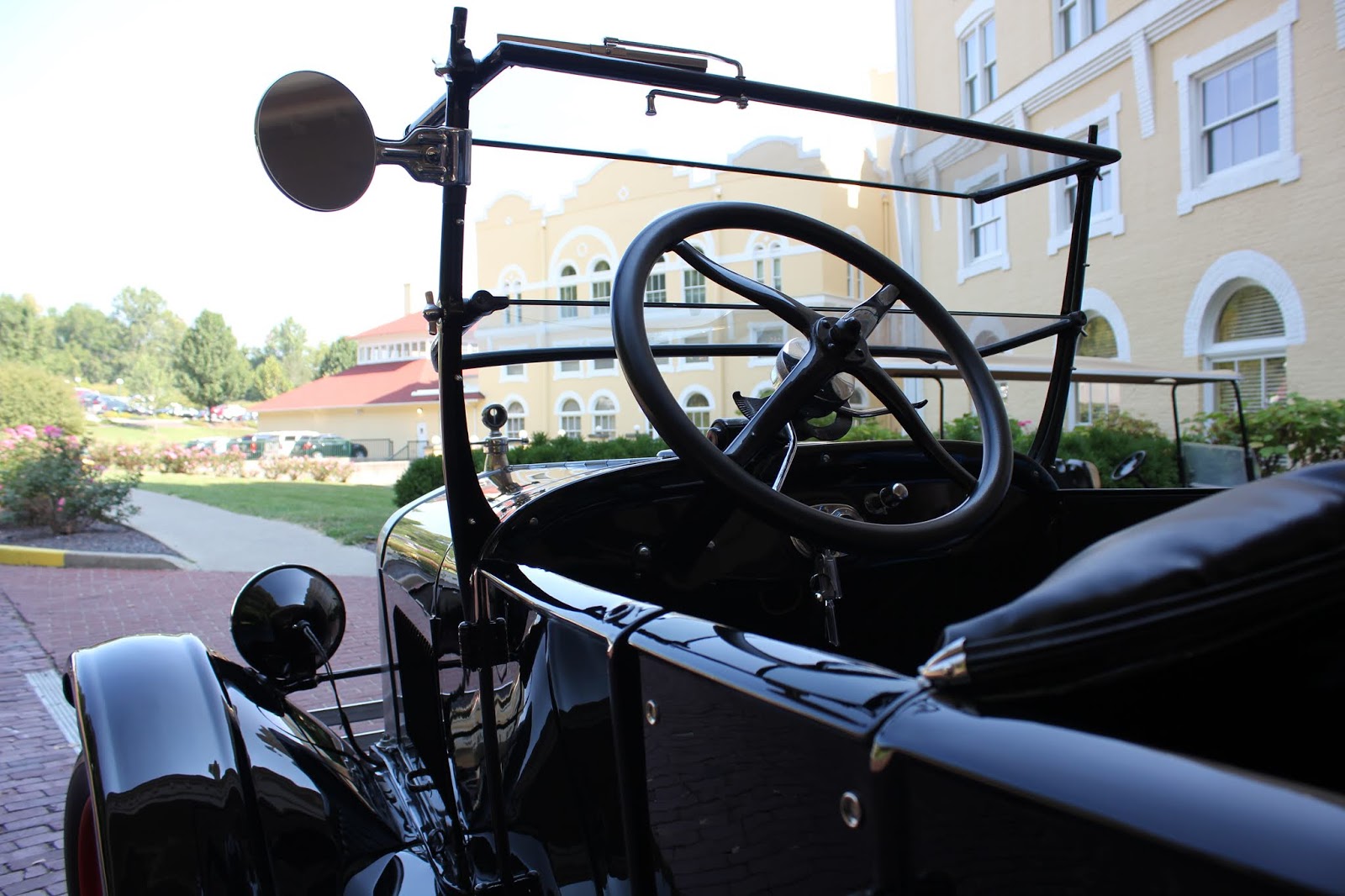 When you’ve got a pair of historic hotels that were at the height of their popularity in the 1920s, you gotta have some classic wheels to go with them, right?
We’re not just all about beautifully restored buildings — you could say we’re classic car enthusiasts here at French Lick Resort. Over the years, we’ve built a little collection of classic automobiles. If you’re lucky, you may have ridden in one before as we use one of these classic cars to shuttle guests between hotels occasionally in the summertime when we break them out of the garage to take them for a spin. A better chance to see some of them up close: see them displayed during our Vintage Weekend happening now (September 13-15), and even take a ride in one during our weekly Vintage Joyrides.
A little bit more on our classic cars: 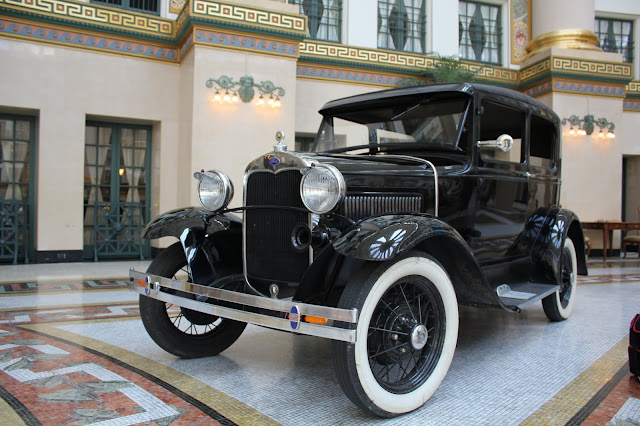 1930 Ford Model A TudorNot only can you see the Model A Tudor displayed this weekend in the atrium, but you can also take a ride in it during our Vintage Joyrides, which run every Thursday from 4-9 p.m. in September and October.
This is the newest car in our collection and second Model A (we also have a 1929 Roadster). If you go for a Vintage Joyride in the Tudor, you might find it’s got a little get-up-n’-go. These usually top out at 40-50 mph on the road but this one has gotten up to 60, so it’s a little spunkier than most. 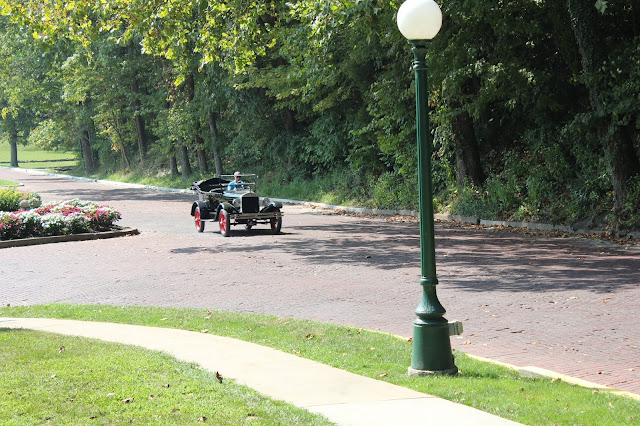 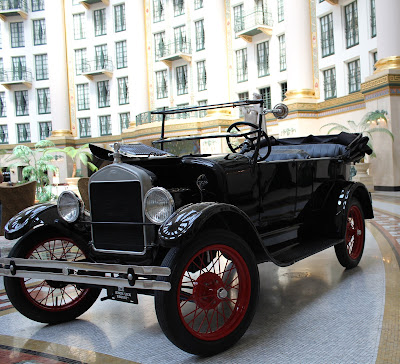 The oldest car in our collection, the ’26 Model T is a Touring Edition with a convertible top that can give an open-air ride. It was passed down through a local family and they had it restored. When the time came to part with the car, the family thought the resort should have it, so we bought it to add to our little fleet and it’s one of the three cars on display this weekend in the atrium.
Still one of the best-selling cars of all time as it rose to prominence during the era when car ownership became a reality for the average American, the first Model Ts had a 20-horsepower, 4-cylinder engine, reached a top speed of 45 mph and got 13-21 miles per gallon of gas. A little quirk of the Model T: Since gasoline was fed to the engine only by gravity, and the reverse gear offered more power than the forward gears, it frequently had to be driven up a steep hill backward. 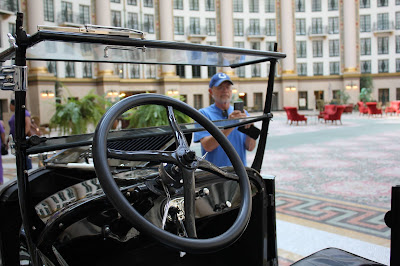 French Lick Resort’s transportation director, Sam Ray, has even been known to give guests a surprise ride in the Model T: “In the summer when we’re not displaying them, on busy days or weekends, I’ll break them out of the garage and drive them around between the hotels, so if there’s one or two people at one of the resort valet entrances I’ll take them over to the hotel or someplace out in town – it’s just like a free courtesy ride,” Sam explains. “And people get a kick out of it. You can hand-crank start the Model T using the crank on the front. Guests always get a kick out of watching someone hand-crank it.” 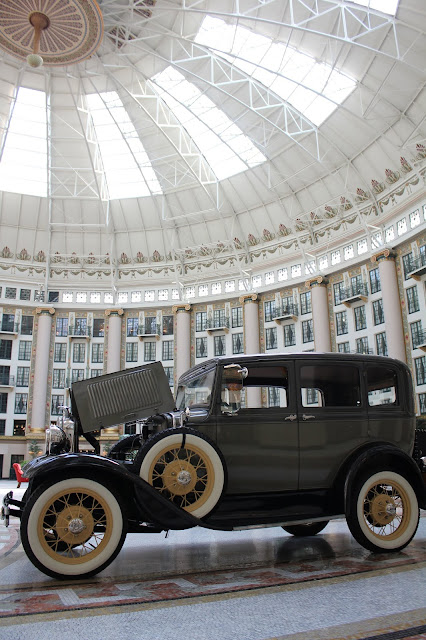 1931 Model A Fordor Deluxe Town SedanThis is the third car on display this weekend, along with the Model A Tudor and Model T. It’s not part of the resort’s collection, but belongs to French Lick Resort Historian Jeff Lane. He bought it four years ago fully restored and added some exterior touches with new mirrors and a trunk on the back. You might have seen a few of these cruising around here in the early heyday of the hotel – 1931 was the last year the Model A was made, and one year before West Baden Springs Hotel closed to guests in 1932.


1929 Phantom I Rolls-RoyceThis car is undergoing additional restoration at the moment and won’t be displayed this weekend, but it’s the one with roots to the original glory days of the resort. This Rolls-Royce was originally owned by Thomas D. Taggart, the former owner of French Lick Springs Hotel. He custom ordered a Saint Andrews model Phantom (a seven-passenger town car or limousine) for $18,500. (That’s equates to more than $260,000 today.) 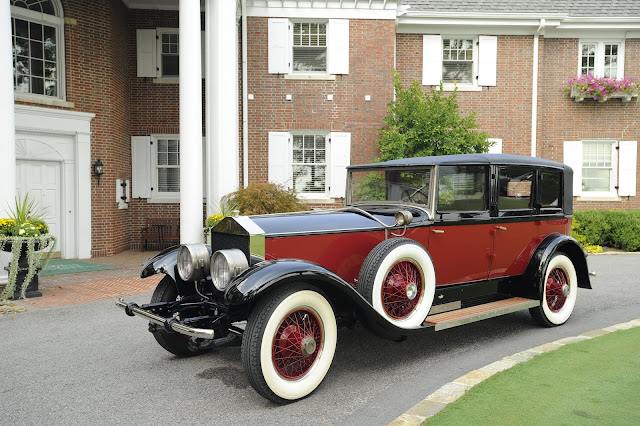 The Rolls-Royce was not only Taggart’s personal vehicle, but it also provided transportation to many politicians, celebrities and VIPs who stayed at Taggart’s hotel during the 1930s and ’40s. Guests who possibly rode in this luxury coach include Howard Hughes, Lana Turner, Bing Crosby, Abbott and Costello, Joe and Rose Kennedy, John Barrymore, and the Astors.
In 1931, the National Governor’s Conference was held at French Lick Springs Hotel, and the Rolls-Royce transported some of the governors and delegates to private parties and meetings. One governor in attendance you’ve probably heard of: New York Gov. Franklin D. Roosevelt, who became the 32ndU.S. president a year later.
The Phantom was twice as big, twice as fast and powerful, and twice as heavy as other cars during the time. Even today, you could get it over 70 mph on the freeway.
After Taggart died in 1949, the Phantom was left to the French Lick American Legion. The Legion continued to use the car until 2003 when the engine died during a parade. In 2009, French Lick Resort agreed to take care of restoring the Phantom. It spent six years in Pennsylvania getting disassembled, parts replaced/repaired, cleaned, polished and re-upholstered — and today, this beauty doesn’t look a day over 90 years old. 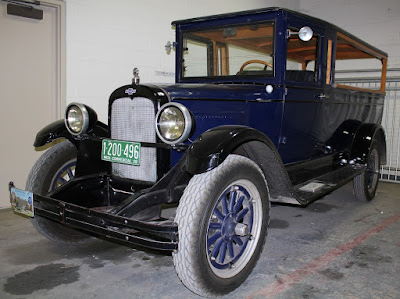 1928 Chevy Express 1-Ton Pickup TruckFolks in the 1920s commonly used this as a delivery truck, so your glass bottle of milk or your newspaper might have come off the back of the Chevy Express. It wasn’t meant for big loads and heavy-duty cargo. It topped out in fourth gear, so you’re only doing about 25, maybe 30 mph tops in this. Sturdy and reliable, but not a speed demon.