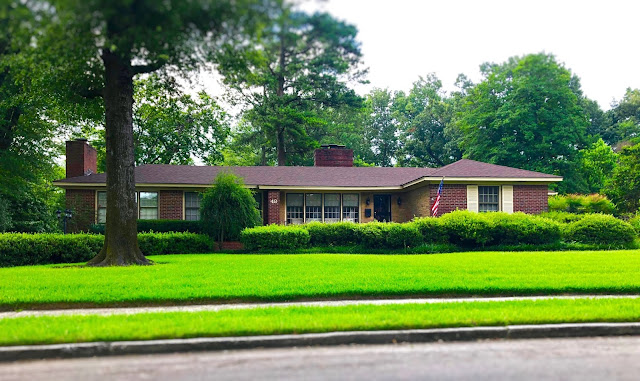 This photo was not taken in East Memphis, where a plethora of similar mid-century ranch homes exist. No, this house - and many like it - sits more than four miles to the west of where you would expect it in what just might be considered the first "infill" neighborhood in the city: Green Meadows-Poplar Glen, an island of East Memphis tucked away in Midtown. 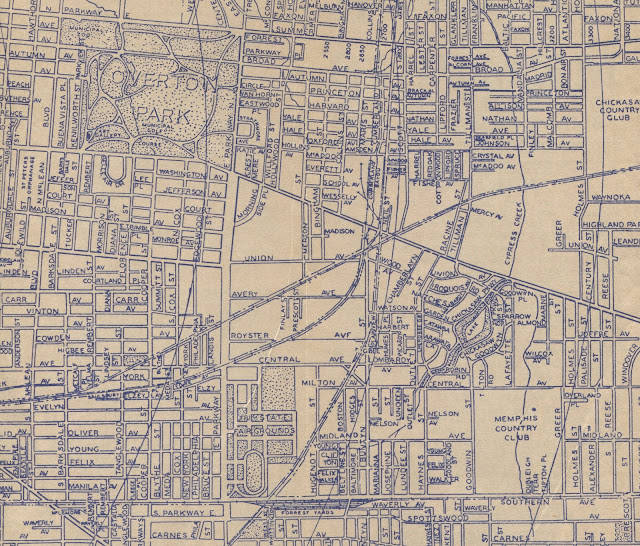 This map from C.A. Davis Printing, ca. 1943, shows the location of Green Meadow-Poplar Glen in the center (east of East Parkway, south of Poplar and north of Union). Note how the City had basically grown completely around the neighborhood. This was the result of the resistance of one family who owned the property: the Colliers. 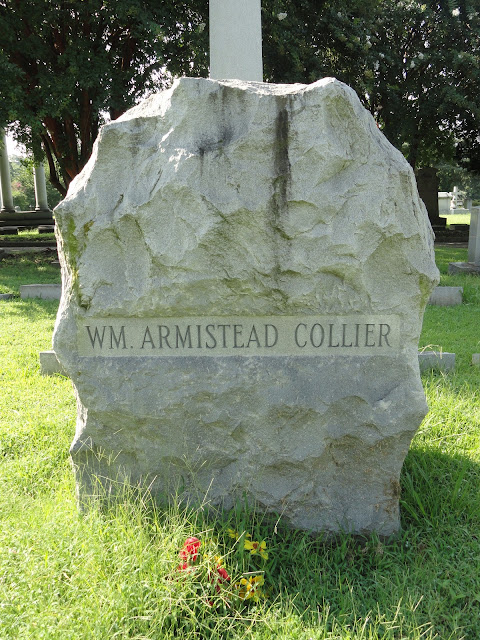 Many of the information and materials contained on this post are courtesy of a resident of Green Meadows-Poplar Glen, John T. Dulaney, who has also provided me with some great historical materials for this blog in the past (including the nearby Poplar Viaduct). For many years, East Parkway served as a bookend to the city's eastward development pattern. This was not by accident. Much of the property on the east side of Parkway, from Poplar on the north to Southern on the south, was owned by the Collier family. At its head was William Armistead Collier,  an attorney who married into the clan whose ancestral home included this land, the Trezevants.  Pictured above is Mr. Collier's headstone at Elmwood Cemetery. The City jumped over what had been its physical and psychological eastern boundary in 1919 when it annexed the Collier tract. This was unusual in the sense that the city often held off annexation of a particular area until it had become developed. But when it appeared that Mr. Collier had no immediate interest in dividing up his property, the City took the preemptive strike of pre-build out annexation, perhaps under the belief that the higher taxes would force the Colliers to develop the land and the city would get one of its main east-west arterial, Union Avenue, properly extended to New East Memphis. 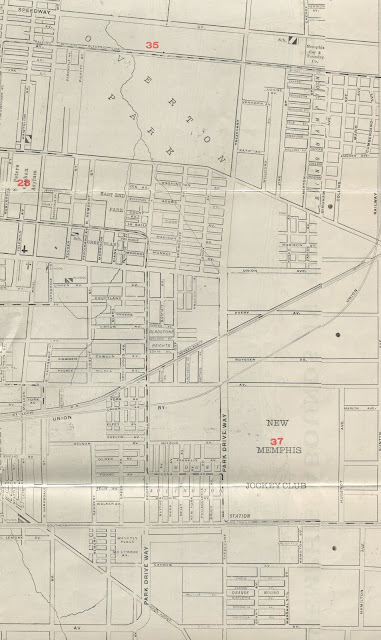 This map from 1914 portrays the lay of the land when Memphis annexed the Collier holdings. While Binghampton north of Poplar (at the top right of this map) and Orange Mound south of the New Memphis Jockey Club (later the Tri-State Fairgrounds, seen here at the bottom right of the map) were notable exceptions, Memphis essentially ended at East Parkway, which was interestingly called out on this map as "Park Drive Way."

After annexation into the City, the Collier's refused to pay their taxes in protest. Mr. Collier died in 1929 but his widow and son, Alicia Trezevant and Thomas Barksdale Collier, took over the fight in his absence. By the time the family reached an agreement with the City in 1936, an alleged 750 lawsuits had been filed on the matter and the family owed the City more than $700,000 in back taxes, penalties and attorney fees. This amounts to more than $13M in today's dollars! As part of the settlement, the Colliers agreed to deed many of their vast holdings in the area to the City and County. See map below.

This map, titled "City of Alicea Park" (which was never a city at all) shows land that the City/County took ownership as part of the settlement with the Collier's in black and the property that the family held onto in grey. That's Poplar at the top, Central in the middle and Southern at the very bottom. East Parkway is on the left and Buntyn St. (the portion north of Central would later become Flicker St.) on the right. In time, most of the City and County land became devoted to public uses. The Liberty Bowl was built on the bottom black rectangle where Hollywood and the RR meet; the large blocks in the center became Mayor Frank Tobey Park, the City and County School Board headquarters and the Commissioner Claude Armour Fire and Police Training Academy. Other notable institutions include Christian Brothers College (later University) at East Parkway and Central. My grandfather was one of the first students of this location, making me an indirect beneficiary of the Colliers' tax shenanigans. Map courtesy of John Dulaney from the Watkins Overton Papers of the Memphis and Shelby County Room, Memphis Public Library (Box 23, Series 1). 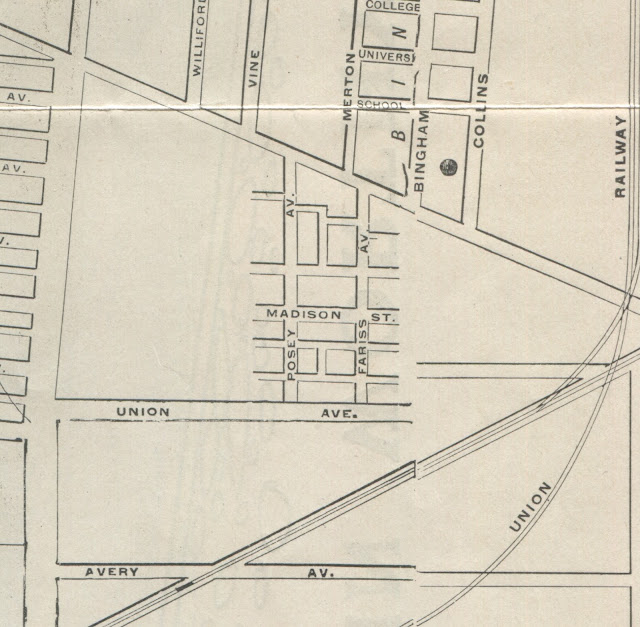 The maps above reflect that a portion of the superblock that is now the Green Meadows-Poplar Glen neighborhood was actually developed prior to annexation into the city. Here is a close-up of the area in question, which featured several stub streets that were built in anticipation of a greater street network in the area. 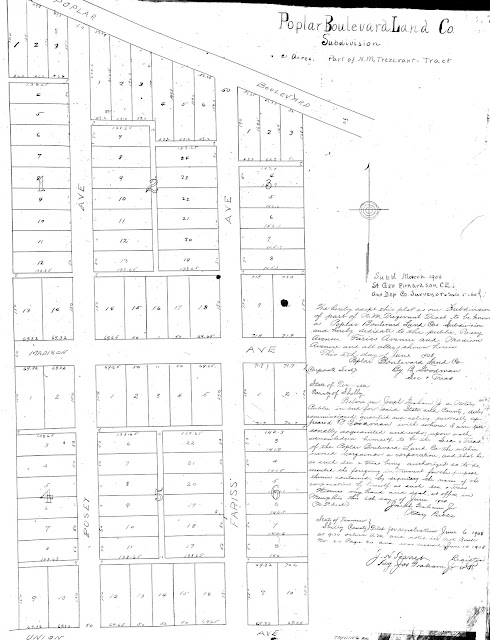 Here is the plat that laid out that small area: the Poplar Blvd. Land Co. Subdivision, recorded in 1904. This little neighborhood would sit as an island waiting for some neighbors for some 40 years. Plat courtesy of the Shelby County Register of Deeds. 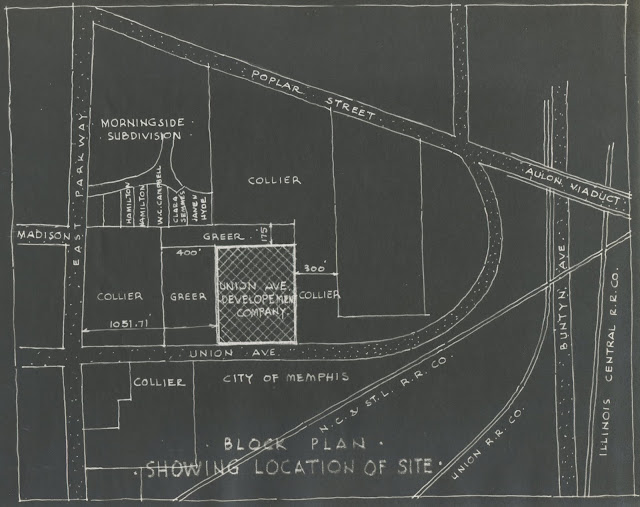 By the time the City declared victory over the Collier's in 1936, it was ready to build Union east of East Parkway. This began in 1938 (see this earlier post on the varying historical interpretations of exactly where Union Extended actually begins). The construction of Union Extended almost immediately spurred development of the area. Before it was even complete, a proposal to build apartments in the area highlighted above was submitted to the Board of Adjustment (see this earlier post on more information on that zoning request). 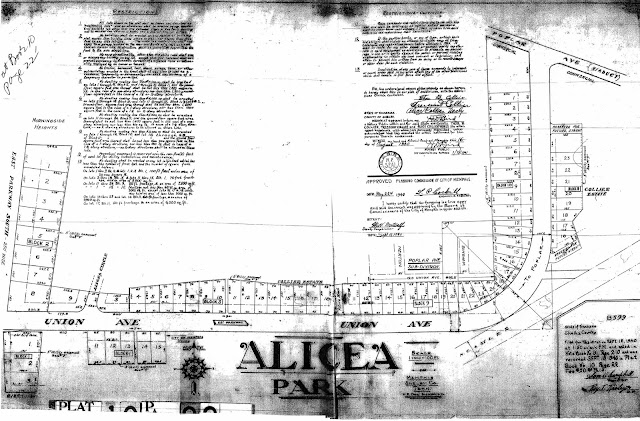 The apartments on the north side of Union Ext. never materialized, although a similarly-designed apartment complex, Georgian Woods, would be built on the south side of the street. The Collier land on the north side of Union was developed in 1940 with the recording of this subdivision, Alicea Park, named after Alicia Trezevant Collier. Note how this subdivision, as well as Union Extended, were squeezed through a very small area between the Nashville, Chattanooga and St. Louis RR on the south and the 1904 Poplar Blvd. Land Co. Sub'd. on the north. Plat courtesy of John Dulaney from the Shelby County Register of Deeds. 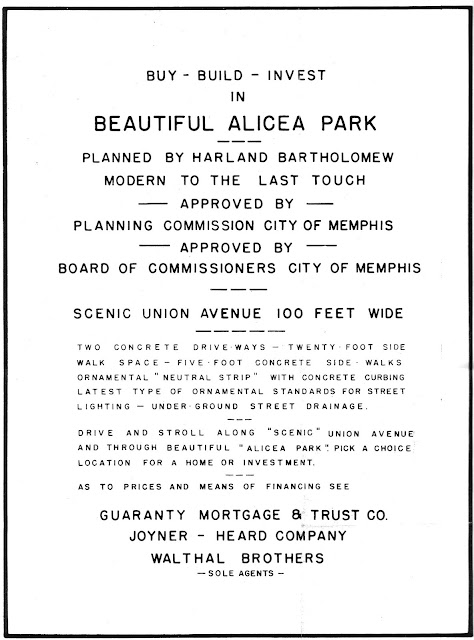 Here is an early advertisement for the Alicea Park Subdivision, courtesy of John Dulaney from the Shelby County Archives. According to Mr. Dulaney, the reference to noted city planner Harland Bartholomew was likely a nod to Bartholomew's 1924 recommendation that Hollywood Street north of Poplar be connected to Hugenot Street south of Avery. At the time, underground drainage pipes were still a rare piece of infrastructure, as the curbs and gutters of streets were still largely used as the city's main method of stormwater management in the 1940s. 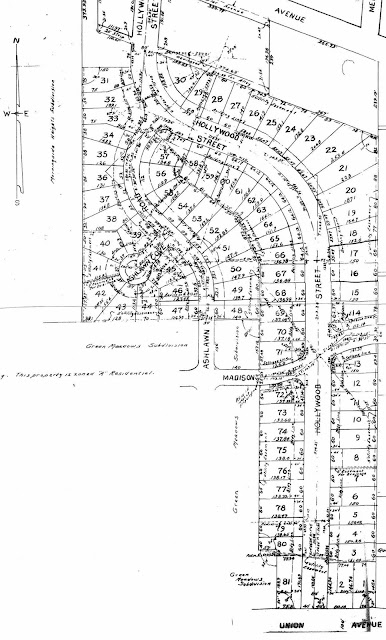 The Poplar Glen subdivision was platted in 1945 and indeed fulfilled Harland Bartholomew's suggestion that Hollywood become a major north-south roadway. The subdivision aligned Hollywood with Hugenot (which would later be renamed South Hollywood), resulting in a significant curve in the roadway. Hollywood is one of many streets that was designed with such curvature at Poplar to allow north-south connections crossing the avenue (see this earlier post that looks at all eight of the Poplar doglegs in Shelby County). Plat courtesy of John Dulaney from the Shelby County Register of Deeds. 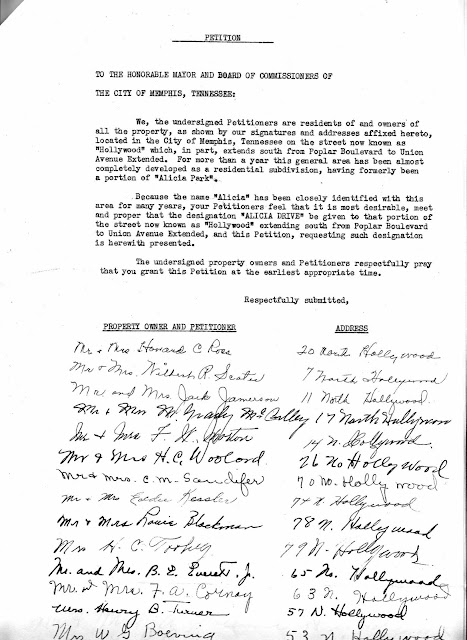 In 1949, this petition was filed with the City requesting that Hollywood between Poplar and Union be renamed Alicia Drive in honor of the longtime association between that name and the neighborhood. Petition courtesy of John Dulaney from the Shelby County Archives. 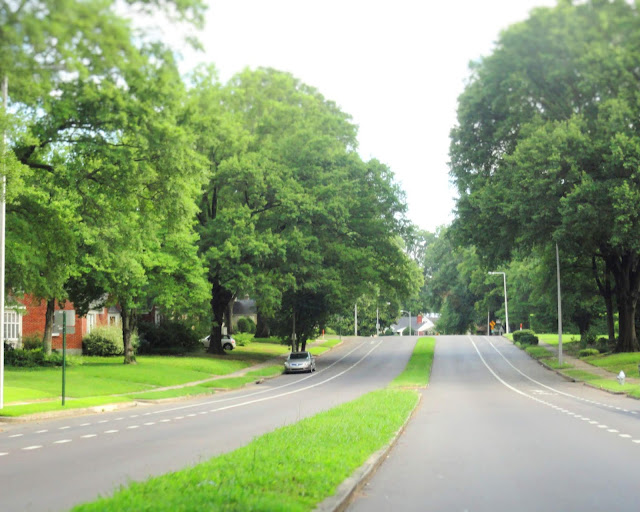 Here is Alicia Drive today, though the Green Meadows-Poplar Glen neighborhood. Interestingly, although this stretch of Hollywood was renamed to honor the history of Alicea Park - the woman and the subdivision - the neighborhood surrounding it has instead adopted the name "Green Meadows-Poplar Glen," reflecting the two newer subdivisions in the area. See this post on Memphis Heritage's website for more information on the neighborhood and its status on the National Register. 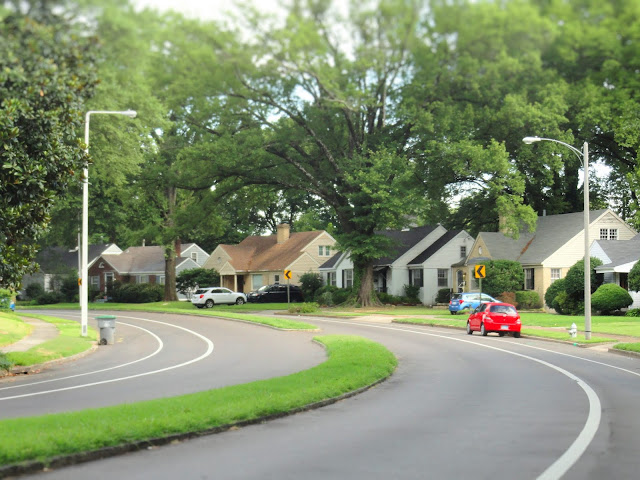 Here's the legendary curve on Alicia Drive; the City recently re-striped the road for on-street parking and bike lanes, which will hopefully slow the traffic and reduce the number errant vehicles that have been known to jump the curb in this area. 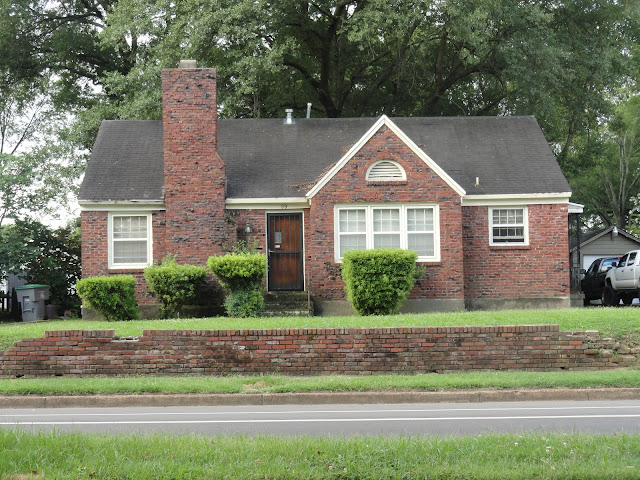 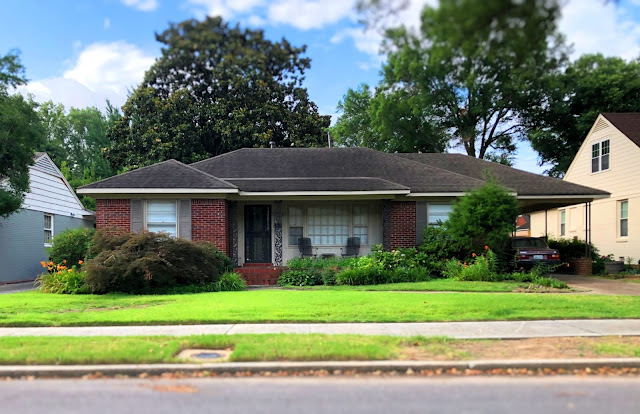 The more noteworthy homes in the Poplar Glen, Green Meadows and Alicea Park Subdivisions, however, were not built in the 1940s, but the 1950s. Like the house at the top of this post, this home looks as if it were plucked from East Memphis. 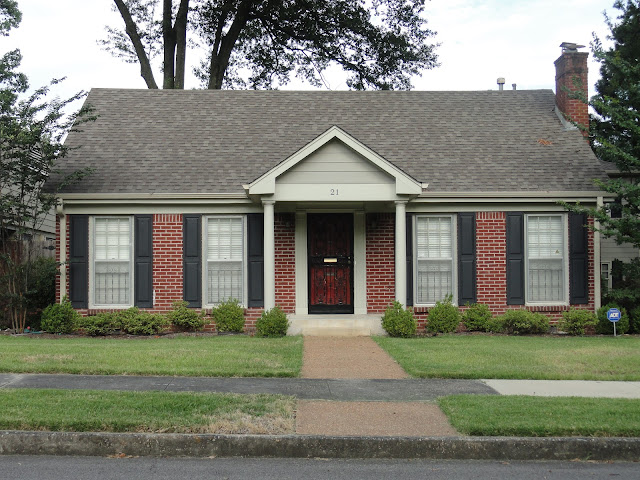 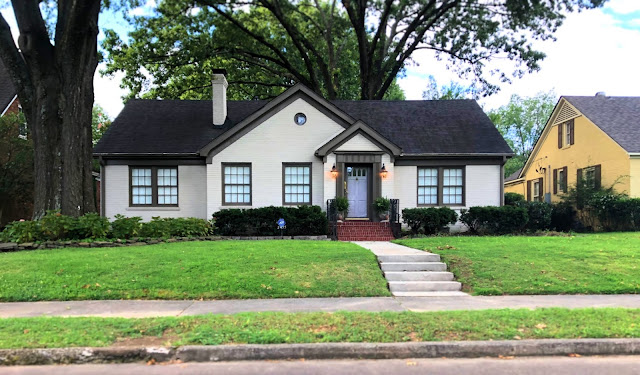 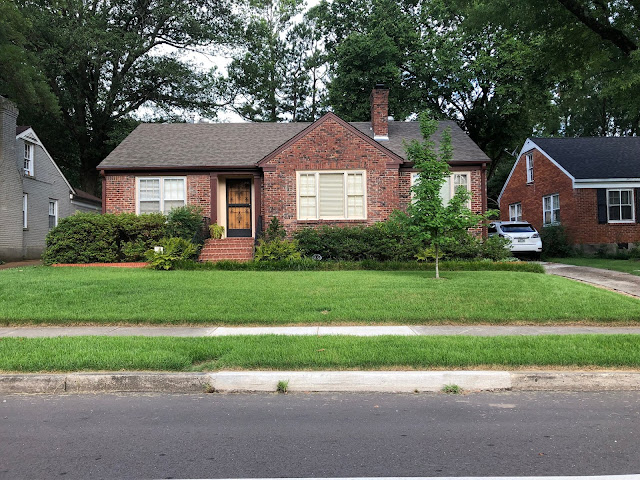 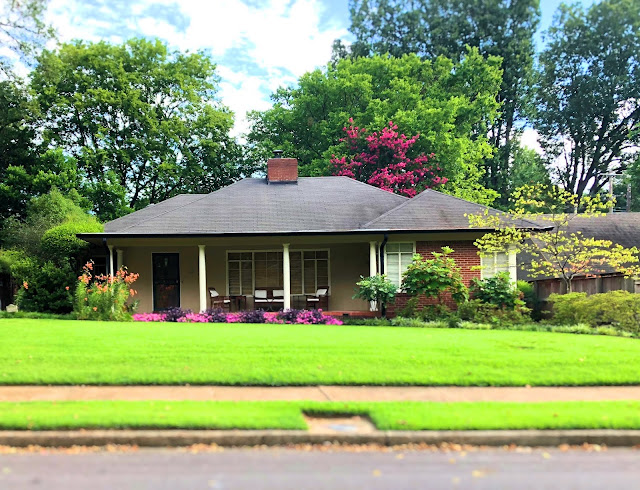 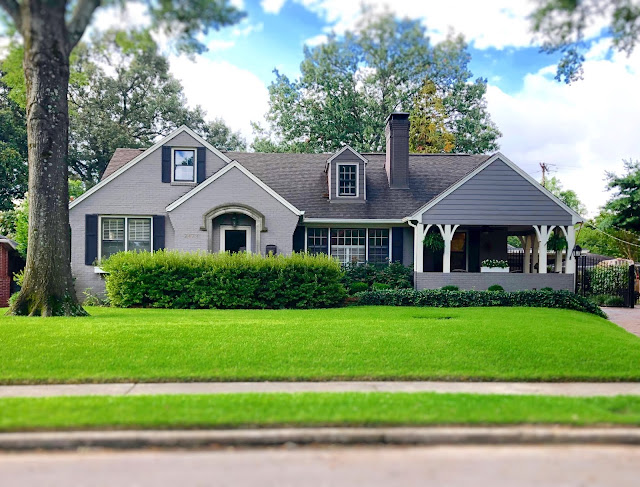 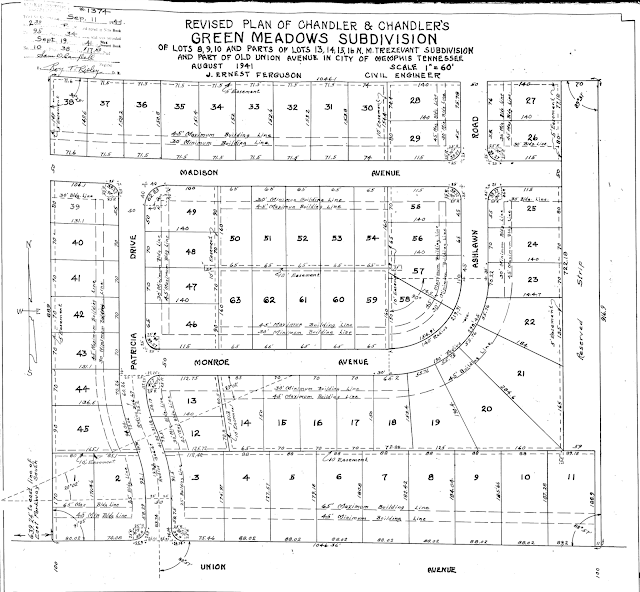 One of the more unique aspects of the Poplar Glen and Green Meadows subdivisions is that they provided a continuation, albeit a disjointed one, of two of the city's major east-west arteries, Madison and Monroe. The plat above of the 1941 Green Meadows subdivision, courtesy of the Shelby County Register of Deeds. The former serves as the zero mark for north-south addressing, covered in this earlier post. This marks another similarity between the neighborhood and those that resemble it along Walnut Grove in East Memphis (which serves as the zero mark east of Highland): low house numbers! Pictured below is a house numbered "44." 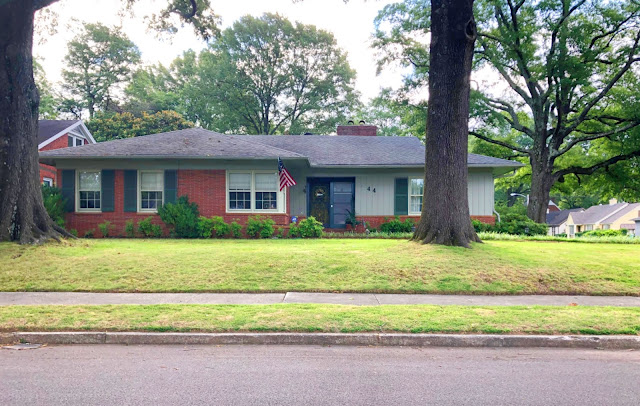