Capoeira was a graceful fighting art form. It revolved around the rhythms, colors and community of Brazil. The indigenous people of South America and the African slaves helped keep the form of combat alive under the guise of a sport. Many of the strikes did not lose their lethal nature though. It came in especially handy for escaped slaves and prisoners. It was up to the developers at Spiritonin to bring the history of Capoeira to life and make it appear as diverse in game as it was in reality by applying different variations of the art to different characters. For some it flowed freely and highlighted amazing spinning strikes. For others it was an explosion of concentrated punches and counter attacks. The beauty of the art form was countered by the ugliness of some of the combatants in Capoeira Fighter 3. This did not mean that the characters were physically ugly but that they exploited the form simply for the sake of harming others. The worst of these offenders went by the name of Zumbi. The Mestre had played the heavy in the previous incarnations of the game but by the third chapter in the story he became a boss-level fighter. Zumbi did not simply gain a host of more powerful attacks but his voice, his appearance and even stage had changed dramatically. The end result was a monster of a man named Zumbi Azul. This new character observed many of the same conventions that were created by Capcom when the studio designed Gouki. 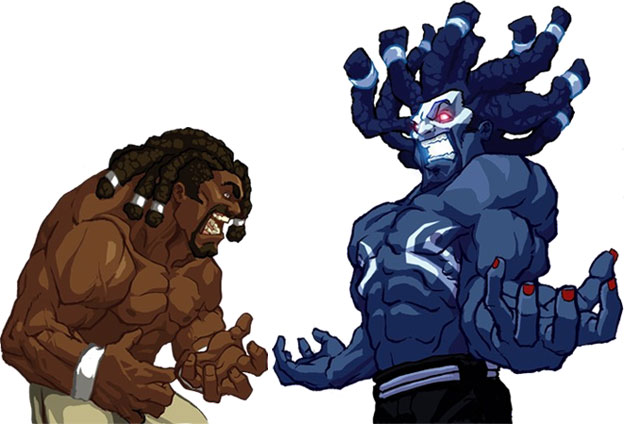 Zumbi Azul was meant to evoke supernatural origins. Creator Scott Stoddard and artist Adam Ford started by changing his skin color. The cool blue was "painted" over Zumbi as part of a dark ritual. It was meant to reflect the night. Symbolically this also reflected the dark Macumba spirits that had possessed him. The contrast from white painted markings was meant to make the character look like a skeleton as well. These new color choices were contrasted by blood red eyes and fingernails. It made Zumbi Azul look like a Voodoo Spirit rather than a person. These things were all done deliberately. Every design clue in the game was meant to invoke images that would have been clearly understood by gamers in the West. Gouki had animalistic features, dark red skin and other traits that were universally recognized as making him demonic. Some of his other cues were not as obvious to players outside of Asia. The spiky hair was reminiscent of the guardian spirits or Nio and the rope belt he wore had Shinto connotations. In order to make Zumbi and the mythology of Zumbi Azul work the studio had to put in enough visual cues that highlighted the spiritual elements in the series, again the spiritual elements from the West.

Capoeira Fighter 3 had a mix of influences, not solely from the fighting styles but also from other video games. It was heavily based in the visual style of Street Fighter Zero but with gameplay elements, control schemes and animations from Street Fighter III and Tekken as well. Part of the success of the other games were the memorable stages that the fights took place in. Spiritonin used landmarks that had a dual meaning in several of the levels. The Sao Paulo Cathedral and statue of Christ the Redeemer from Rio De Janeiro were important symbols from Brazilian Christianity. Two beautifully painted versions of these places, by Ford, were the backdrops for the heroic characters in the game. These icons were meant to reinforce the personalities of the cast. Mestre Rochedo was a noble fighter and was constantly vigilant against Zumbi. He would warn his students to watch out for him in the game. Rochedo fought in front of the statue of Christ, seemingly invisible to the tourists that had gathered there. The name Rochedo actually meant cliff in Brazilian, it was short for the saying "only the cliff can face the wind." In this case only Rochedo could face Zumbi and his dark powers. Ramba was a student of Mestre Loka, another honorable teacher. She was a tough fighter whose macho attitude earned her the female equivalent nickname of "Rambo." She was actually in law school during the third Capoeira Fighter Tournament. Both of Ramba's possible endings had her helping out the less fortunate and thus demonstrating strong Christian values. It made sense that the Sao Paulo Cathedral was the backdrop for her stage.

The Western world was much better acquainted with the Christ figure and symbolism of churches and iconography. The themes explored by these stages would have been easily understood by Western audiences. Even non-Christians could appreciate the aesthetics of the level designs. The earth tones used for the cathedral balanced the cool darkness of the sky and the warm glow of a setting sun. It showed the beauty of the cathedral and the streets of Sao Paulo at night. The Christ statue itself was very serene and peaceful. The use of clouds made the stage location look heavenly. Those that followed the religion were familiar with the lessons of Christ. They knew that fighting was not a sin, especially not if the person was fighting against the forces of evil. In this case it would be the Christian belief versus the pagan ideal. Even the art of capoeira itself was filled with religious undercurrents. There was a sincere relationship between the Mestre and students, not unlike a priest or pastor and their parish. Those that would earn a name had to undergo a Batizado or Baptism as well and earn a place in the community.

The interplay between good and evil, light and dark was not lost on either Zumbi or Zumbi Azul. Zumbi was a bad guy yet his stage was visually one of the nicest ones in the game. In other fighting games the bad guys sometimes fought in a dirty alley or dark forest. For Zumbi the character fought on train tracks. On the horizon was a setting sun. It gave everything in the level a soft glow. From the farm house in the distance to the nearby grain elevators and even factory smokestack, the industrial and rural met in relative peace. It could be interpreted as symbolic of the state of Zumbi. The character was at a crossroads as well. He had dedicated his life to combat and was willing to forgo the traditional world of man and the beauty of the modern world. This would be the dusk of his existence and night would mark his transition into a new person. The stage of Zumbi Azul was a stark contrast to the train crossing.

The cool blues and grays of an old cemetery at night were meant to elicit a chilly response from players. The full moon, framed by ominous clouds, gave off an ethereal glow. This type of level design was meant to tell a story. The stages created for Gouki in the Street Fighter series were layered with themes of Hell and the afterlife. Even though these places could have actually existed somewhere in Japan there was a certain subtext that was hard to ignore. The cemetery of Zumbi Azul was meant to do the same thing in Capoeira Fighter 3. This was the place that the dead called home. Any person foolish enough to face Zumbi Azul there would probably end up joining the residents before dawn.

This new "home" of Zumbi Azul was decorated with multiple candles, hinting that some sort of ceremony had been performed there. Of course popular media would suggest that the only types of ceremonies performed over a grave or mausoleum at night were unholy. If Zumbi had died physically, spiritually or even symbolically perhaps he would have been reborn with new powers. The spirits of the Macumba would now be in charge of the man. One interpretation of Zumbi Azul was that he had become a Zombie, or servant to the dark forces. The actual Haitian practice of Vodou gave rise to the zombie myth. Unscrupulous practitioners of the dark arts were called Bokor. These people would kidnap people to turn into mindless slaves. Other times they would raise the dead in order to turn them into servants.

The ceremonies the Bokor performed, their various potions, spells and curses had been closely guarded secrets for several centuries. Modern science had created a plausible theory for what these so-called masters of the dark arts had actually been doing. First they poisoned their victims with a strong neurotoxin, from a puffer fish or poisonous frog. This would slow down their breathing and heartbeat to an undetectable state. The person would then be declared dead and be buried in a shallow grave allowing time for the toxins to wear off. The Bokor would then magically "revive" the person by force feeding them a paste made up of sweet potato, cane sugar and the hallucinogenic plant datura. The end result, provided that the person actually survived the ordeal and was fit for work, was cruel and grotesque. The newly born zombie would be brain damaged from the lack of oxygen during paralysis and unable to communicate, reason or have any higher brain functions. The Bokor would constantly beat, berate and keep the zombie in a stupor with their drugs while forcing the zombie into a life of slavery. 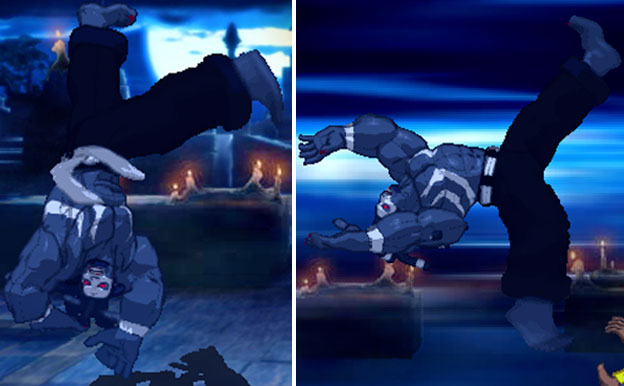 The Bokor claimed that they did not raise zombies to sell into slavery but rather that these people were being punished for committing the most cardinal of sins against the religion. The lack of medical information and strong word of mouth gave credibility to the supernatural powers of the Bokor. It was not uncommon for some family members to remain vigil over the grave of a deceased relative until they were certain that the body had begun to decay and would not be exhumed. In other instances some people were dismembered by their own family before being buried. Whichever the case was the African and Afro-Caribbean communities learned to be wary of these mysterious rituals and practitioners.

The mythology of Macumba, the Orisha and Voodoo worked in favor of Zumbi Azul. This was a character that embraced his own evil tendencies and turned himself into a monster. It was as if he were both the Bokor and Zombie. He did not want or need an accomplice to perform the ritual he had studied up on. Those that wanted to follow in his footsteps, characters like Maestro and Buldogue, would be turned into blue-skinned servants. At least in one of the possible endings both of the fighters became minions for Zumbi Azul. This villain demonstrated all of the traditions that made for a great evil character. He was willing to do whatever it took to win. He lacked respect for the life of his opponents and even himself. He was willing to pay with his body and soul in order to achieve unstoppable power. Capoeira Fighter 3 was already a good fighting game given the diversity of characters, strong minorities, balance, animation and control. It became a great fighting game when it included a villain that could be held to the same standards of the best bosses. The next blog will look specifically at the things that reflected the heritage of Zumbi Azul and close out this series. As always if you enjoyed this blog and would like to sponsor me please visit my Patreon page and consider donating each month, even as little as $1 would help make better blogs and even podcasts!