How Many Shots Does That Thing Have? 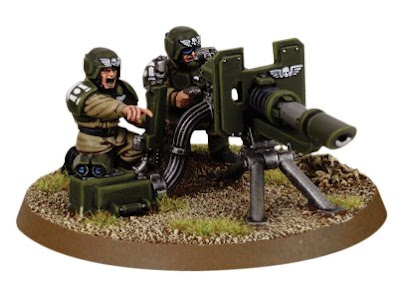 I stopped by my FLGS the other night to drop off a few models and it was a case of being in the wrong place at the wrong time for me.

No sooner had I walked in that I was handed a copy of the rulebook and asked to read a particular sentence and give my "interpretation" of it.

UPDATE: I went back and looked up the actual SINGLE SENTENCE referenced:
From the big rulebook, Page 55, left column, 5th paragraph down...
"Any crewman that is within 2" of a gun in the Shooting phase can fire it."

To summarize:
Apparently, some people believe that the more "crew members" you have around an artillery piece or heavy weapon or something like that, the more times you can shoot it regardless of the weapon's profile.

And I wonder why I kill myself to try and play more often. I mean really, I can see a simple misunderstanding of a rule but when you go looking for a way to "spin" a rule into what you want, I think you've lost sight of the bigger picture.

Are there rules that can be confusing, sure. GW misses things and sometimes it can be tricky to figure it out but this isn't rocket science, it's little plastic toy soldiers for crying out loud.

My initial recommendation then:
Lean across the table and punch the guy in the head for trying a stunt like this. But... I would never advocate violence for something like this so I said you'd do better destroying all of their "extra" crew members until there were the same number to match the weapon's original profile.

No, I don't think that's a good option either.

I think the real solution is to up your standards and stop playing against people who play like that.
Maybe they'll get the idea... and then again, maybe not.