How To Make Your Own Pre-Heresy Jump Packs 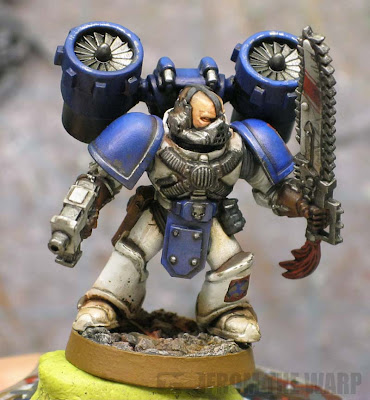 A while ago I posted this Pre-Heresy World Eater Space Marine with a normal jump pack. After seeing Forge World release their Legion MKII Assault squad to go with their ever expanding Heresy era bits, I figured it was time to see if I could make my own jump pack on the cheap. 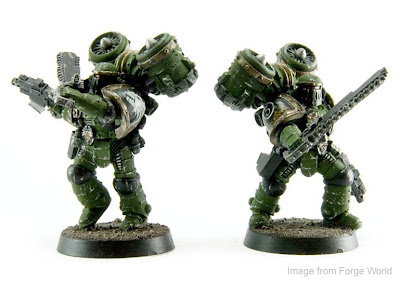 This project is more about seeing if it could be done quickly and cheaply more than anything else. You could expand on this quite easily and probably come up with something pretty convincing. A little more detail and these would most certainly pass first inspection and tabletop use. Maybe not the exact detail the Forge World ones have above, but close enough for me.

The only bit that I used that might be hard to get a hold of would be the two drop pod exhaust vents. That's right, drop pod bits. You really only need one if you are the casting type and then you could make a simple press mold and come up with enough for a whole assault squad army. 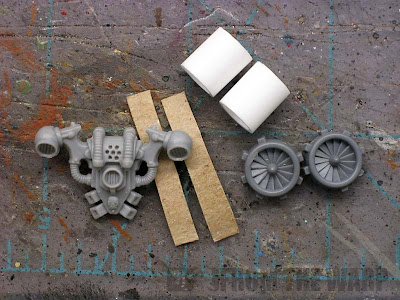 What you're going to need to do this conversion
You're not going to need much. Aside from the drop pod vents, it's a single plastic pen tube, a Chaos Marine backpack and some cardstock. The pen tube is from the cheapest pens I could find that had no printing on the sides of them. I bought a pack of them a while ago for the tubing for various projects.

The pen tube is 8mm wide from outside edge to outside edge in case you're wondering... pens come in lots of different sizes and such. 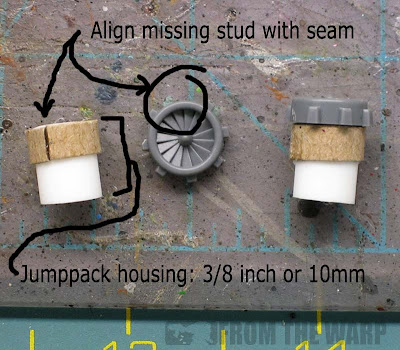 The pen tube is cut to 3/8 inch or 10mm long depending on what side of the pond you're on. The length could be anything really, it comes down to looks. The cardstock is cut to a suitable width as well as its only purpose is to bulk up the top of the tube so the vent does not look out of place glued on top. 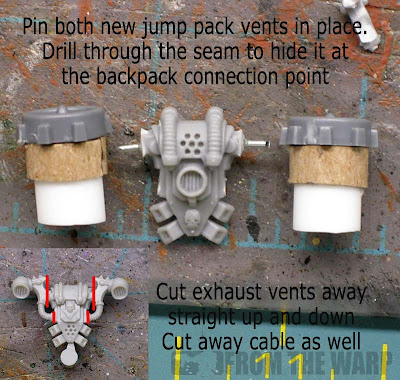 Once I had my two engines built, I cut the vents off my Chaos backpack. I cut off the vents and made sure my cuts were straight up and down so I could mount my engines and they didn't look odd or at a weird angle. I also pinned my two engines in place for stability. I drilled through the seam of the cardstock in order to hide it under the connection point with the backpack.

I chose the Chaos backpack for the way the vents were attached. They are set out from the body of the backpack where Loyalist ones are kept in close. This made it much easier to mount my new engines. That and the pair of cables over the top helps bulk it out as well and lend a little bit of credibility to the conversion. 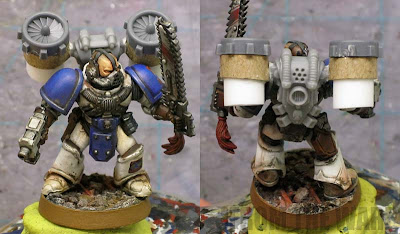 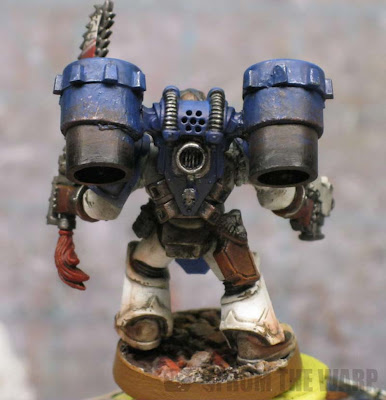 And what it looks like attached to the model. I think the scale is spot on myself. Like I said, it could use some more detailing on the engine housings, but other than that, this thing is a perfect fit for my purposes.

Since I had the spare drop pod engines and needed bits lying around, the cost for me was absolutely nothing to build this. If you had to buy it, you'd have to consider what it would cost to buy enough Chaos backpacks and then at least one drop pod exhaust vent (if you were willing to cast enough). The casting wouldn't be hard at all since it's a simple press mold at that.

Add detail for effect and if you're feeling crazy, you could even magnetize them for some truly functional jump packs. I think the magnets might cost more than the rest of the bits combined though.

Make sure to check out these posts as they might help:
Magnetized Flesh Tearer jump packs
Pre-Heresy World Eater Space Marine