Note To Americans: PIGS Is A Four-letter Word

Spain has been in the U.S. News _a lot_ this last year. And when it's not the usual buzz about tourism, it has been news about Spain's failing economy, the next domino in what could be the so-called collapse of the European economy. I don't think American newspapers bat around the acronym "PIGS" or "PIIGS" as much as British ones do, but I want to take this moment to say that this peculiar acronym says a whole lot more about those who use it than those it describes. 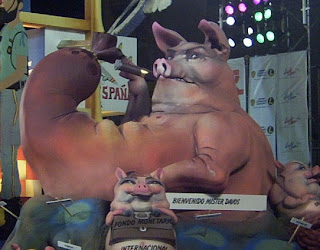 A "ninot" (papier-mâché figurine) from the 2002 Na Jordana Falla
in Valencia, depicting the International Monetary Fund as a fat pigPIGS, which stands for Portugal, Italy, Greece, and Spain (sometimes also Ireland) is a term that is used when talking about these countries and their systemic problems with political corruption, chronic high levels of unemployment, and all around economic backwardness. But, please, enough with it! I ask you, what does it say about economists that they can lump together countries and cultures (not to mention economies) as different as Spain, Italy, Portugal, and Greece's (and Ireland!?!) under one simple moniker. Oh, and is it meant to be cute that they call them "pigs"?

Next time you see it, remember, there is an ugly undercurrent of north-south stereotypes in Europe. Hemingway fell for it, too, in his day, though he loved Spain for it… a society still not modernized, prone to lawlessness and spontaneous bouts of anarchism or self-destruction. I imagine economists thinking, "Oh those southern Europeans, they can be so intense and passionate" (read emotional and irrational). I don't buy it. PIGS, after all, is a four-letter word.