Off The Topic: Embracing Technology

I'm going to start this post off with a big, giant *sigh*. From about age 18-30, I was fairly "up" on the latest technology. Maybe even before that. My dad is a design engineer. And he was always into the "latest" computers. He had an Apple Lisa II when it came out back in the day, Then a Commodore 64. And since then, I had a computer toward the end of high school and laptop in college. Email. The internet. An original iPod. Ecetera. I had a blog when the idea was still fairly new and shared photos of our newborn kids through a website. There was a point when my mom said, "Holly's whole life is on the internet." and that was before Facebook and EVERYONE'S whole life was on the internet.

But somewhere along the technology road, I got lost. Somewhere around the explosion of the iPod Touch, smartphone, iPad era. The sudden explosion of devices, all their uses, apps, etc. It all seemed overwhelming to me. I'm not saying our household didn't participate in the digital revolution. Oh, we have ipod touches, Nintendo DSs, NookColors, iPads, smartphones, etc. But I only learned very basic things to do on each device and stuck with that. Otherwise, it seemed like I would just spend my life going from device to device. And don't get me started on my kids' use of these devices. It drives me batty!

However, I've come to realize several things. 1) The devices are not going anywhere. In fact, I'm pretty sure they will just keep coming and joining our household. 2) This is the world my children live in. A friend of mine told a story from her daughter's kindergarten teacher. The kids (all ages 5-6 years old--keep in mind the iPad is three years old and the iphone came out in 2007--the year many of these kids were born) all sat down in the computer lab to take a standardized test. They all had a screen, keyboard and mouse. Half of them did not know what to do with the mouse. And swiped their finger across the screen as if to wake it up!! Can you believe that?!

That is such an indication of the world we live in and the world our youngest children are growing up in. My embracement of technology the last 10 years has been slow but steady. For the longest time, I vowed I wouldn't get an e-reader. I LOVE books. In fact, I had a book blog at one point in time. And I couldn't imagine a world without holding a book in your hand. But then, I got a NookColor one Christmas and well, I concede. It is nice to have an e-reader. I do still enjoy reading actual books, but the e-reader isn't as evil as I once thought.

We received the original iPad as a Christmas gift a few years ago. And to be honest it hasn't been used for much except entertainment for the kids. We have educational apps, fun games, movies and music on it.

BUT. We are now in 2013. And I've decided maybe it's time to really fully embrace these devices. We received an iPad Mini for Christmas this year. And it has prompted me to do some actual research on how to use these devices to their fullest ability. And I found out some really great things! 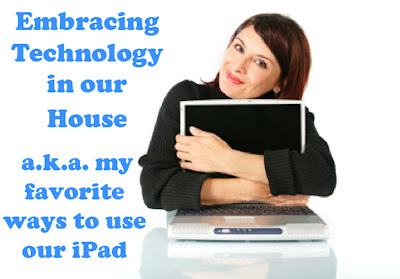 Image Source
#1--REUSABLE WORKSHEETS on the iPad: Did you know you can put printable worksheets (pdf files) onto an iPad and they can be used over and over again? You need Dropbox and GoodNotes as well as a stylus. There is a great tutorial here. Thanks to the ever growing homeschooling environment, there are all kinds of worksheets and free printables on the internet. Here's a link to some on Pinterest.

Using worksheets on the iPad changed a bunch of things in this household! My first and third graders have math fact sheets (from school--so a random math app doesn't work here) they need to practice and it is sooo easy to have them practice them on the iPad instead of making copy after copy of the worksheet that is sent home. They just do the final timed test on the actual paper. Can you say GREAT FOR THE ENVIRONMENT! LESS PAPER, LESS CLUTTER. LOVE it! Also, my technology savvy three year old is more apt to stay focused with a pre-writing activity on the iPad than if I tried to give him an actual worksheet to do.

#2--EXCELLENT NEWS SOURCE: I've used iGoogle for years to receive my news headlines. The iGoogle frontpage will not exist anymore after November 2013. I've been sort of searching for a replacement for this. I believe I found it in two different apps on the iPad: Flipboard (my preferred news app) and Zite. They can be used in combination with an app called Pocket. ALL FREE! This is really amazing to me! You can save items from the internet into the Pocket app and then read them OFFLINE at a later time. Great for reading articles on a plane or when you don't have access to WI-FI (like traveling in the car). It also easily provides me with my Google Reader feed and Facebook.

#3--VISUAL SCHEDULES:My oldest daughter has apraxia and sensory processing issues. When she was a preschooler, we used a yard stick with velcro on it and photos of various places we went on a daily basis so we could create a daily visual schedule for her. This helped her transition between activities much easier if she knew what to expect during the day. Now, my youngest child appears to have some sensory processing issues and a language delay. I thought about getting the ol' yardstick visual schedule out. But I figured he would just pull them all off or play with them. He had trouble with the visual schedule at his speech therapy sessions. UNTIL, they started using an iPad for their sessions with him. They took photos of each activity ahead of time and they would show him the photo the activity. Let him swipe to the next one. Do that activity. Swipe and repeat. Seeing each item one at a time really helped him focus and made him feel less overwhelmed.

Once we received the iPad Mini with the camera on it. I decided I was going to try this approach at home. Using Photo Stream and iCloud, it will be easy to create a daily visual schedule for my son. I will expound more on this in a separate post. ;-) I'm still learning iCloud and consolidating information on there to use on devices across the board.

You can read a more thorough explanation of this at this post: 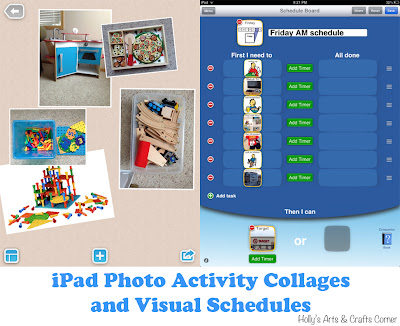 #4--EVERNOTE--What a great way to link information to all your different devices. I use this app to create to-do lists for myself, save information from the internet into one place, and organize my planning thoughts when it comes to our summer art projects and science experiments.

In the past, I have used my laptop to show the girls artwork and examples during our art and science projects. I plan on getting everything organized so we just have to use the iPad for this instead.

(Sidenote: Since initially writing this post, I've realized that there are some bugs in the latest version of Evernote and my notes are not syncing across devices. Kind of annoying! Hopefully they will fix this bug in future updates.)

#5--PINTEREST--Anyone who reads this blog faithfully will know I'm addicted to Pinterest. And I'm very thankful for art education blogs and Pinterest because I have been able to provide so many more lessons and ideas for my children. Now, I can use Pinterest without lugging my laptop all over the house! :-)

#6--MEAL PLANNING/SHOPPING--There's an app called Menu Planner (it's $2.99, but well worth the price!). You can store all the items you regularly shop for and make lists from them. You can store your recipes and add them to a calendar. FABULOUS! You can also scan bar codes to add items. It's so great that it not only helps you plan future meals, your past meals stay on the calendar so you can remember when you last had something. Youc an also organize your shopping list in the order of the aisles at your grocery store (and save more than one store configuration).

Those are just a few of the ways we have recently incorporated more technology into our lives around here. I still long for my children to know the days of being completely unplugged. But that's not their lives. It sort of scares me to think what the world will be like when they are my age and have their own kids. But I try not to dwell on that too much. :-)

All of the above may be old news to you. You may have already embraced all this new fangled technology into your life. But I thought since this was all new to me, maybe it would be new to someone else. Having it in a post with everyday uses might be helpful to someone so I thought I would share.

How do you use your iPad in everyday life? I would love for you to leave a comment with anything new and exciting that I have missed and maybe I'll learn even more! What are your favorite apps??