cream puffs, profiteroles, eclairs - whatever you want to call them, they have been on my to make list for a while now. but as long as i've had them on the list, i've passed over them, thinking they're too hard to make. cooking a dough on the stove top and baking it? sounds like a recipe for disaster.
i couldn't have been more wrong! i got up one saturday morning, determined not to do anything else until i was biting into a cream filled eclair. one hour later, i was doing it. i couldn't believe how simple the dough was to put together, how easy it was to cook it on the stove top, and how delicious they came out! a big thank you to susie at sweetie petitti for giving me the confidence to tackle these little pastries for the secret recipe club. 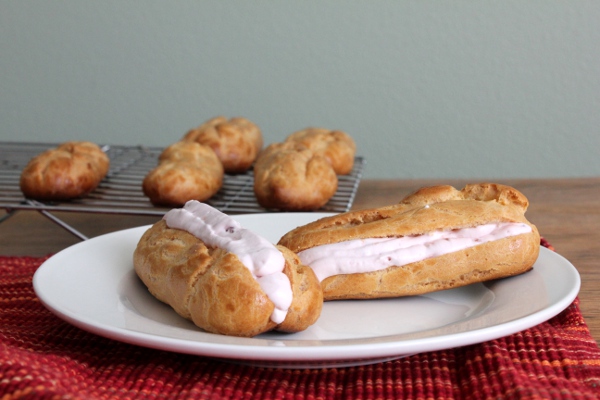 while susie stuffed her cream puffs with pastry cream, i chose raspberry flavored whipped cream. and since i still have so much jam left from last summer, i whipped homemade raspberry jam into my cream to both sweeten and flavor it. not a fan of raspberry? i bet these would be amazing with pretty much any kind of sweet, fruit jam.
for more information on the secret recipe club, including the list of participating bloggers, featured recipes from members, and instructions on how to join, visit the secret recipe club website!

6 tablespoons water
3 tablespoons butter
pinch of salt
1 1/2 teaspoons sugar
1/2 cup flour
2 eggs
about 1/2 cup heavy cream
about 2 tablespoons raspberry jam
preheat your oven to 425F and line a baking sheet with parchment paper.combine water, butter, salt, and sugar in a saucepan over medium heat. bring to a boil, stirring constantly. remove from heat, add the flour, and stir until evenly combined.return the pan to the stove over medium low heat. cook, stirring constantly, until the batter dries slightly, about three minutes. transfer to a bowl, stir with a wooden spoon to cool slightly, and let sit a couple minutes to cool even more.add one egg to the batter and mix until incorporated. after the first minute of mixing, it will appear as if the egg won't incorporate with the batter. keep mixing and it will. add the second egg and mix until smooth.
transfer the dough to a piping bag or zip top bag. pipe dough about 1 inch wide and 4 inches long, leaving at least three inches between them. dip your finger tip in water and push down on any tips that may have formed on top of the eclairs.bake for about 10 minutes, or until well puffed and lightly golden in color. turn the heat down to 350F and continue baking until dry and brown, about 20 minutes. cool completely on a wire rack.when ready to serve, whip the heavy cream until soft peaks form. add the jam and continue whipping until medium stiff peaks form. slice into the side or top of the eclairs and fill with the whipped cream. store unfilled eclairs in a loose container (not airtight) to keep them dry and fill just before eating. document.write('