The giant monster genre was a subsection of the monster genre. The tradition of scary beings went back to the earliest days of storytelling. Imagine primitive tribes sitting around a fire recounting the time they almost got eaten by a giant bat or snatched by a troll living under a bridge. Monsters were sometimes shape-shifters, they looked human from a distance but then up close they were something else. The bigger the monster, or god, the greater the chance for destruction. Gods and giant monsters were the roots of disease and natural disasters. Some demanded a blood sacrifice in order to be satiated. Smaller monsters could still be bloodthirsty, or demand a sacrifice. Their destruction was limited to a small group of people, a clan sometimes, they were just effective when used for a cautionary tale.

One of the classic monsters was the Cyclops. The one-eyed monster was the child of the god Zeus. The creature had a habit of eating trespassers on his island. He was blinded by Odysseus (Ulysses) and as punishment Zeus caused Odysseus and his crew to be lost at sea for a decade. Most lost their lives to various creatures, large, small and seductive. Homer the poet was credit for writing the Odyssey. The creatures he described represented a various state of being for the gods, or hubris for the lost Greek sailors. No matter how far they traveled, they could never outrun their past. The monsters in classic literature manifested our innermost fears. Another creature that reflected our psyche was the monster created by Dr. Frankenstein. The story by Mary Shelley was a cautionary tale about accepting responsibility for your actions. In the case of Dr. Frankenstein he was a reckless scientist. He succeeded in creating life from death but was horrified with the results. He abandoned his creature and without a master or guiding hand to temper his existence the creature terrorized a village. There were so many layers to the creature, ranging from pitiful to morbid. It made the creature both sympathetic and terrifying to behold. When the monster showed up in movies it created a template that would be copied by other studios and even game developers. 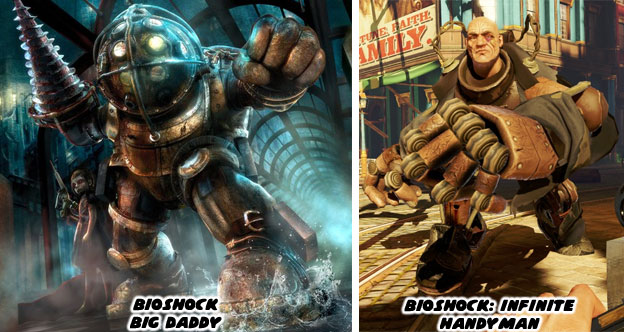 Bioshock by 2K was released in 2007 and had a monster not unlike Frankenstein's creature. The "Big Daddy" was a mutated man inside of a twisted diving suit. He was protective of his "daughters," mutated girls. Like the creature he was obscenely strong. He was relentless in his pursuit of the hero. The setting in the game made the encounters with Big Daddy much more intense. Audiences were trapped in the remains of an underwater city called Rapture. The hero couldn't simply run to the next town for help. The additional layer of isolation on top of a great antagonist made the series unforgettable. In the follow-up title, Bioshock Infinite by Irrational Games, the player was trapped aboard a floating city called Columbia. The game from 2013 replaced Big Daddy with a cybernetic automaton called the Handyman. Like Frankenstein's creature it was an unstoppable force with a tragic back story. Series director Ken Levine managed to turn both monsters into sympathetic creatures by the end of each game.

Great monster stories are about escapism. Whether the setting is Victorian England or Japan in the near-future, there has to be something for audiences to escape to or from. For video games it is not enough to run from the monsters, but to be able to fight them as well. When audiences were introduced to the Big Daddy or the Handyman they were grossly unprepared for the encounter. Early on in each game players had to learn how to hit and run from their opponents. As they gained experience then they earned new weapons and abilities. Eventually the game evened the playing field and audiences no longer had to fear the monsters. This formula has probably never been exploited more than in the Earth Defense Force series.

Earth Defense Force is a long-running series from publisher D3. The game has traded multiple developers since it debuted in 2003 but the core experience remains the same. You are the hero in the ultimate movie spectacle. Imagine a game recreating the biggest fights in Independence Day, Pacific Rim, Guardians of the Galaxy or Godzilla. In essence the jaw-dropping special-effects scenes that put people in movie theaters every summer. The story in each game is straightforward, you are a member of an elite force that is protecting the Earth from alien invaders. As aliens, in the form of giant bugs start popping up you fight them with small weapons but as you progress the tools get bigger and better. You move from machine gun, to rocket launcher, to tank and eventually science fiction weapons; power suits, laser rifles, rocket backpacks and much more. Your squad is under a constant barrage of enemy fire and giant monsters. It is a frenetic experience that ups the ante with every mission.

If you've never heard of the title there's probably a reason. The game has a cult-like following. Visually the graphics are amazing. The scale of the creatures you have to fight is off the chart. The alien spacecraft, giant bugs and monsters in the series are literally breathtaking. They are among the largest things ever presented in a game. Remember that this includes the enormous monsters in Mass Effect, Resistance, Lost Planet, Monster Hunter and the God of War series. From a game play standpoint there is a lot of action to be had and a ton of different ways to dispose of the various giant creatures you come across, including the ability to pilot a mecha or giant robot. 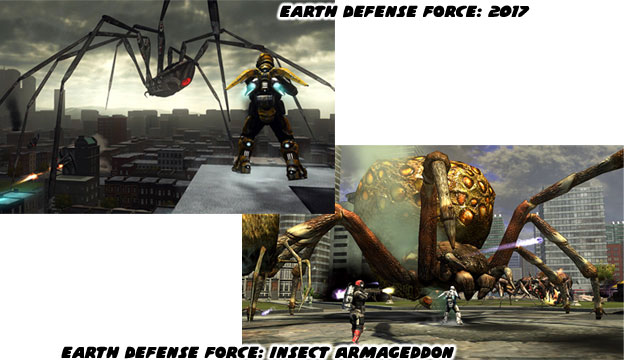 Despite the awesome visuals the game is lacking in depth. Like many of the summer movies the experience is about spectacle and nothing else. Films like Armageddon (1998), The Day After Tomorrow (2004) and San Andreas (2015) pile on the special effects and hope that audiences don't mind the lackluster script or poor acting. The EDF series is the gaming equivalent of those effect features. Small details that are addressed in AAA titles are overlooked in the series. Things like clipping (where 3D models intersect), animation and collision detection are not always right. But it doesn't seem to matter when the game hits you with wave after wave of giant robotic lizards and space ships that eclipse the horizon. No sooner are they destroyed than another batch arrives. You have no time to wonder how cities are rebuilt so quickly or why you are never fighting atop the remains of your enemies. The steady build up and immersive narrative of a Bioshock game is replaced with explosion after explosion. So was there a man versus giant monster game that captured the gravity of the situation better? Certainly! We will look at some examples in the next entry.