The New Evil Ryu, A Look At Kage

Hello friends, I hope that the year has been going well for you. I just wanted to be completely transparent with the slow update schedule. Since fall of last year I've been changing my habits. For health reasons I'm putting myself on a better path. I've also been focusing on my art and less on my writing. I'm still 100% passionate about fighting games, but I've got to make sure I'm healthy for the long run. Thanks for being patient in the meantime. Today I want to talk about Kage, a new character revealed for Street Fighter V at the end of 2018. On the surface level this character is reminiscent of Evil Ryu, because in essence he is Evil Ryu. If you didn't know Evil Ryu had his breakout appearance in the Street Fighter Zero / Alpha series in the mid '90s. For budding game designers that read my blog I mentioned that the transformation of a hero to a villain was a very powerful storytelling tool.

Evil Ryu is a version of the hero of the Street Fighter series that wants to prove he is the greatest warrior. Even if this means killing his opponents in a fight. He is often presented with a tan, and even red eyes in some official art to signify that he is possessed by evil forces. Kage in Street Fighter V is presented in a different light. Instead of simply being Ryu fighting with the evil forces inside of him, this character is the physical embodiment of the Satsui No Hadou. He has neon horns sticking out of his head and elongated teeth. The red headband is broken and rests on his shoulders to signify that his mind is not his own. His head and face are distorted so that it looks more like an ogre and less like a person. The animal traits applied to a human were originally featured on Gouki / Akuma. To make him appear less than human the designers flattened his nose and gave him a crown of blazing red hair. He was meant to conjure images of a lion.

The earlier Street Fighter designs, especially those from the late '80s and early '90s Street Fighter II and Street Fighter EX era were well done. The characters had an easy to identify theme, perhaps they were a soldier, wrestler, or kung fu master. You could tell right away based on their look what archetype they were. Some clues were obvious and some were more subtle. When you added all of the details together they turned a typical fighting game character into an icon. I believe that the the designs in Street Fighter IV and V are lacking. They lack subtlety. They lack an understanding of what made the original World Warriors so memorable. Instead of letting audiences discover that Gouki has lion-like features, the studio now presents him with a literal lion mane. Fans call this version Akuma-matata, a play on the African word hakuna matata. 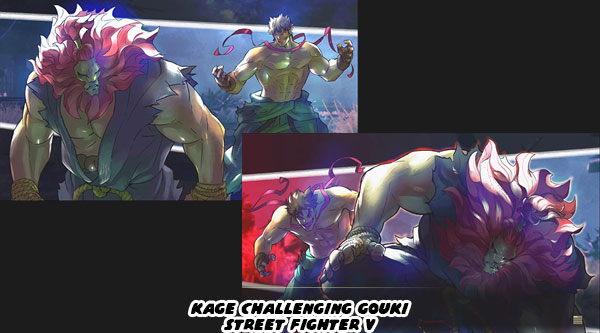 Capcom is hitting audiences over the head with their latest designs. It's the fastest way to tell a story, but it doesn't make it the right way to tell a story. The look of the Street Fighters are loud and boorish, they are the characters that a teenage fan could have pitched. The look of Gouki and Kage are prefect examples of what is wrong with Capcom's current design culture. The majority of new characters, such as Rufus, Hakan, Abel, F.A.N.G., and Rashid introduced in Street Fighter IV and V are forgettable because they subscribe to the same design philosophy. There is nothing wrong with having characters in the franchise that have some animal-like traits. Blanka is an example of that, but he is on the extreme end of what works in the franchise. Characters like Blanka are few and far between. Not to mention that there was already an Evil Ryu. When you start to fill the roster with similar outlandish characters it dilutes those that are really unique. Having literal demons in the series is changing the narrative. This series was founded on martial arts archetypes. As Capcom expands the design circle to include demons and comic book villains then it is going down a path that is hard to return from. 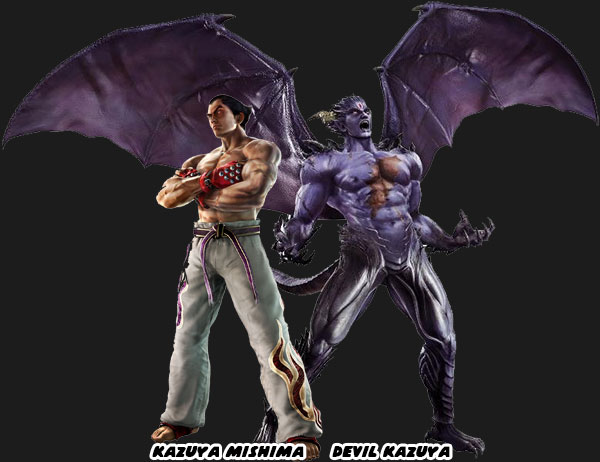 Turning the main character into a monster, and keeping him that way has been explored in other fighting games. Devil Kazuya is possibly the best example of this. Tekken has a number of main characters that have demonic alter-egos. Jin Kazama has a Devil Jin persona, his great grandfather Jinpachi Mishima becomes a demon, and Jin's grandmother Kazumi Mishima also becomes a demon. The series is well known because of the number of fantastic archetypes. The series has monsters, cyborgs, robots and even panda bears. That lineup, that presentation is not in the same vein as Street Fighter. I'm worried that the people designing the next generation of Street Fighter can't make the distinction. 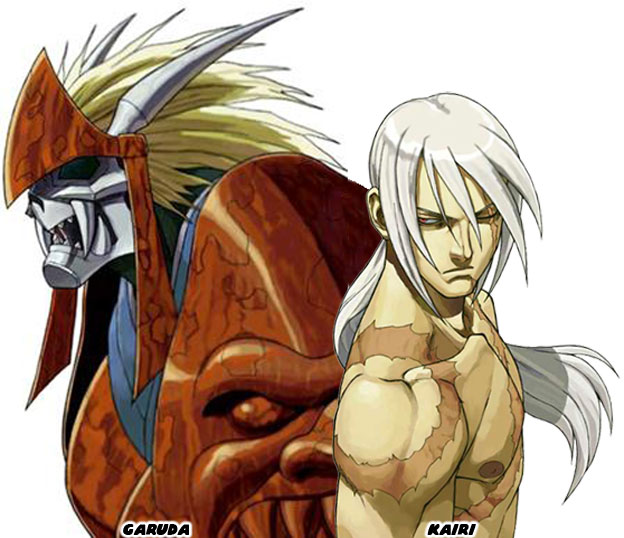 The arc that would have had Ryu fighting his inner demon and facing off against the man that killed his master was considered for Street Fighter III. A lot happened to Capcom in the early and mid-90s during the gold rush of the fighting game genre. As members of the Street Fighter team left Capcom to other companies they took some of those ideas meant for Ryu and Gouki. Having a main character that becomes overpowered and destroys a demon was explored in Street Fighter EX, and later on in the Fighting EX Layer series. Kairi was the surrogate for Ryu and Garuda was the stand-in for Gouki. In ARIKA's franchise it was established that there were supernatural elements in the universe, however the majority of the cast was still rooted in martial arts archetypes. So having some mysticism was welcome in their take of the franchise. The fighting game market imploded at the end of the '90s, and wouldn't recover for about a decade. In that time Capcom had new faces making bold decisions with established characters. In the history of fighting games I consider Gouki the greatest villain ever designed. In the history of the Street Fighter franchise however I only said he was the third most important. 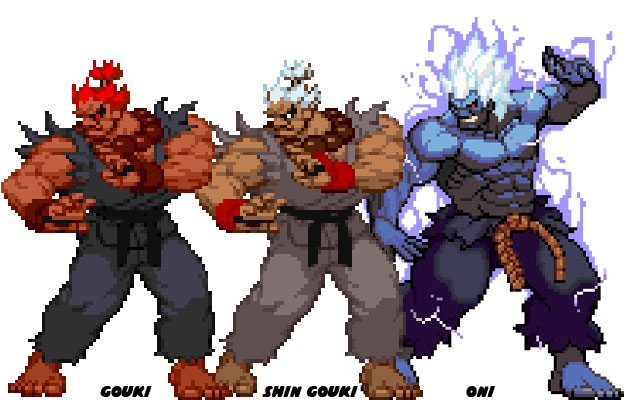 Capcom established that Gouki had a "stronger" form called Shin Gouki, or true Gouki. This was the unleashed, no-holds-barred boss in Street Fighter Zero. More than 12 years later the character was revisited for Super Street Fighter IV: Arcade Edition. The new developers decided that they wanted to make him even more overpowered. Oni debuted, and Gouki went from having subtle lion cues to being an outright DragonBall Z villain. The blue skin, demonic features, and abilities made little to no sense for the character. This was the same type of thinking that went into the look of Kage. Evil Ryu was already a great design, especially with a smoldering crater in his chest from when Gouki tried to kill him. The look of Kage didn't really have enough elements to make him stand apart from Evil Ryu. Some people in the community even likened his glowing horns to cat ear headphones. This was hardly as intimidating as he was supposed to be. To be fair however, Capcom had been pursuing a redesign of Evil Ryu since Street Fighter IV. 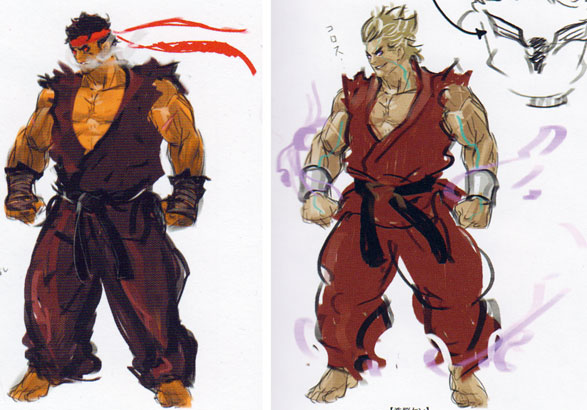 Evil Ryu and Violent Ken were on the drawing board for Street Fighter IV, and each more or less looked like their traditional designs. There was nothing unrealistic or supernatural about their appearance. No wings, fangs, or horns smacking audiences in the face. Instead they each had attacks that were more aggressive or powerful than normal. They had just enough going for them to make them unique. The majority of their appearances were in the sprite-based games of the '90s. This look did not really deviate much until the introduction of Kage. In at least one draft of Kage he was so far removed from Ryu that he didn't even look like a Street Fighter character. If anything he looked like a monster that would have been featured in the manga and anime series Mob Psycho 100. In case you are not familiar with the series, the main character is named Shigeo Kageyama. He is a very plain-looking kid. He is so plain in fact that he is called Mob, a reference to the nobody background characters in most shows. Ryu could be considered similar to Mob, in that he looks like a plain "vanilla" karate fighter. Of course that perception changes when they use their awesome powers. Mob however also has a dark side that manifests from time to time.

If Mob loses control of his emotions he becomes a being made up of raging psychic energy. He no longer looks human in this form. He can be cruel and unstoppable in this form. In the story this makes sense, as series creator ONE has established that all sorts of psychic and metaphysical things are possible in his universe. Capcom doesn't have that luxury. The Street Fighter gang is not made up of ghost hunters. They are not exorcists but instead warriors. Dropping in a demon made of cracking energy would have been way out of left field. So much so that audiences would have pushed back on the design. As it is, they are lukewarm to the idea of Kage. What do you think of the character? Am I reading too much into it? I'd like to hear about it in the comments section. If you would like to sponsor me please visit my Patreon page and consider donating each month, even as little as $1 would help make better blogs and even podcasts!