The Road To Rising Thunder, Part 2...

The giant robot genre really took off in the '60s thanks to the imaginative shows in Japan and the USA. Of course the shows were only half the fun, the other half were toys that celebrated the robots themselves. There were of course toys based on Astro Boy and Tetsujin 28 (localized as Gigantor in the USA). One of the most popular robot toys had nothing to do with comics or cartoons. In 1964 the Marx toy company released a two-player toy game called Rock 'em Sock 'em Robots. The game was a rapid paced affair with players looking to punch the jaw of the opponent and cause the spring loaded head to jump up. The generic red and blue figures became icons in the toy community. 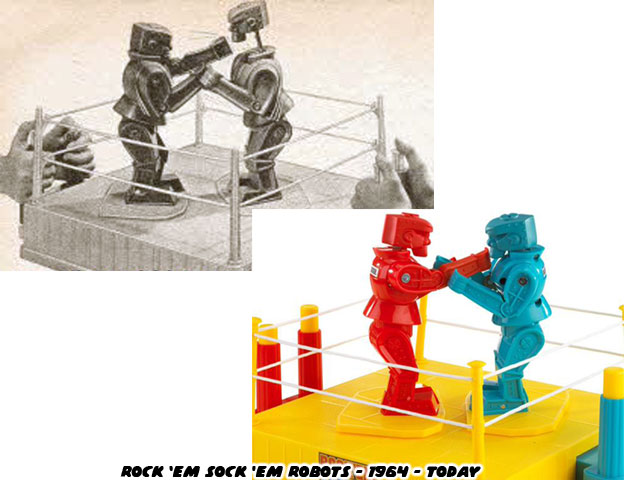 Mattel eventually got the rights to the toys and continued releasing them over the next 40 years. The company did a good job of keeping the packaging, and designs unchanged through the decades. The only thing that they did do was make the figures and ring slightly smaller. Perhaps this was a cost-cutting measure, it did nothing to make the game any less fun. The hard edges, exposed bolts and blocky shapes of the Sock 'em robots were very classic. They looked like the robot designs from turn of the century magazines like Popular Science and Popular Mechanics. With heavy brows and chiseled jaws they looked like battle worn gladiators. They had a sort of endearing quality about them. It took a long time for robots in the US to have the same sort of appealing design in film.. In fact it was post 2000 when the success of the Transformers movies by Michael Bay made toy companies realize that they could option the rights to their toys and make a franchise film as well. Everything from board games (like Battleship) to dolls (like My Little Pony) was optioned to get a movie or at the vert least a television show. The film version of Rock 'em Sock 'em changed the title but kept the heart. 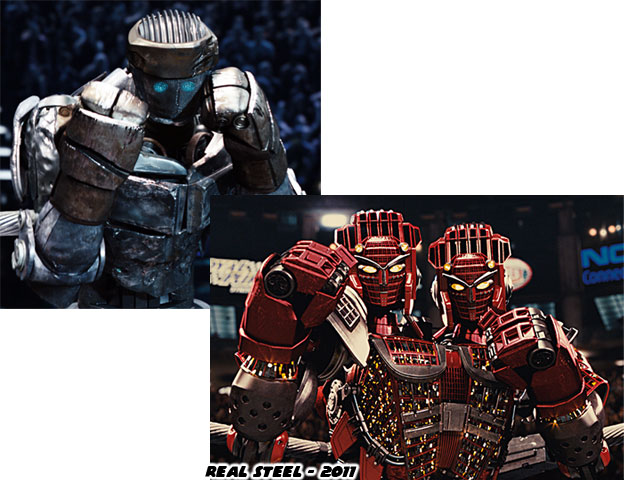 The 2011 family film Real Steel was based on a world where eight-foot tall robots did the boxing instead of people. The film starred Hugh Jackman and the robot he trained to fight named Atom (not a coincidence!). The title had a lot of imagination and introduced robots with over-the-top designs. They were actually well done updates of the classic Sock 'em robots. The studio could have gone a million different ways with the robot designs. They could have had them fighting with guns and weapons like the Transformers films. They could have made them into mechanical bugs and animals as well. But the design team learned that the more human traits they shared the easier it was for audiences to identify with them. So some robots had hair made out of plugs, eyes and in some cases jaws and teeth as well. The humanized designs worked well in Real Steel just as they had on Rock 'em Sock 'em almost 50 years earlier. The same lessons, use of proportions and human traits were applied to the cast in Rising Thunder. But where else did these robotic / humanoid cues come from? 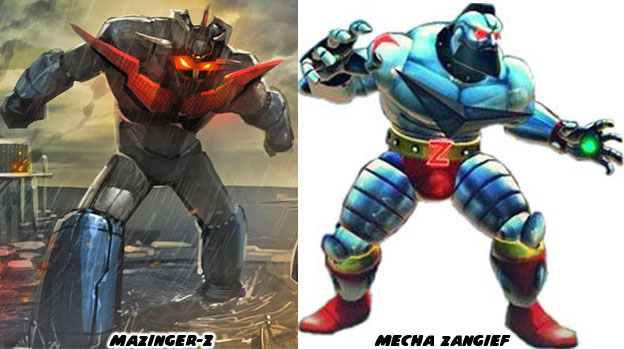 Japan by far had the biggest influence on giant robot culture. The 1972 series by Go Nagai (of infamous Devilman fame) created one of the most popular giant robots ever. Mazinger Z, adapted to Tranzor-Z in the USA, was a piloted robot with an assortment of non-traditional weapons. Unlike the robot designs that used missiles and artillery blasts as a form of attack Mazinger instead had a mix of mechanical and energy weapons. He had a patented rocket punch which allowed him to fire his fist at opponents. On his chest were two red shields that emitted the Breast Fire attack, allowing him to melt most opponents. These were only a few of the assortment of weapons he had at his disposal. The design and abilities of Mazinger Z would be copied again and again by the industry. Some were following the trends but others, like the Mecha Zangief in Street Fighter IV were well done homages.

In the 1970's piloted robots became all the rage. These were considered less to be robots and more like mechanized suits of armor, or mecha for short. Writers and artists were looking for new ways to introduce their creations to audiences. Some were lighthearted adventures for kids and others were dramas set against an eternal war. During the era the robots themselves followed a common design trend. The 1974 series Getter Robo by Ken Ishikawa had a robot that was not unlike Mazinger Z. the colors were almost reversed but the character retained the same cylinder-shaped arms, legs and torso. The roots of those designs could be traced back to Tetsujin 28-go. By the end of the decade the artists working on the shows began experimenting with new styles. Possibly the most important was Gundam. The 1979 show by Yoshiyuki Tomino had robots using more angular shapes and sharper edges. The robots themselves reflected futuristic versions of samurai armor and helmets. The artists working on the series over the next 30 years kept a consistent design aesthetic. 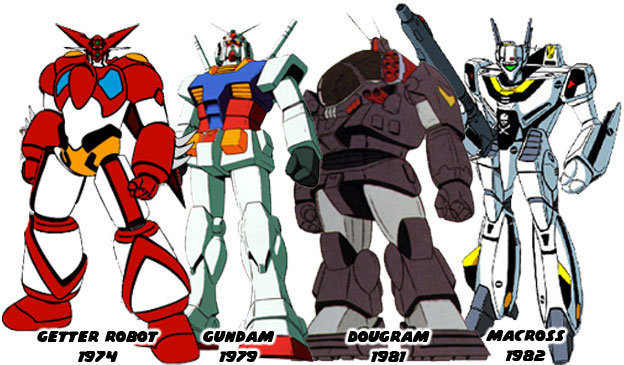 The '80s would continue to build on the new trend started by Gundam. One of the most unique robot shows from this era was Fang of the Sun Dougram. The 1981 series by Ryosuke Takahashi had a unique blend of mecha-meets-western artillery. The shapes of the robots were very similar to US tanks and attack helicopters from the post-Vietnam era. It was easy to imagine that each robot was deployed depending on the type of conflict, whether it be a steamy jungle or the bottom of the sea. The Dougram series went on to influence the creation of the western tabletop game Battletech. The trend started by Dougram would be short-lived as another anime series was set to take over the world. The 1982 series Macross by Shoji Kawamori went one-step further towards Japanese mecha and western weapons. The robots in the series could change shape and become full-on aircraft and artillery. It subtracted the artificial intelligence of the Transformers for the piloted weaponized combat of Gundam. It was genius design and set a standard that would be copied around the world. 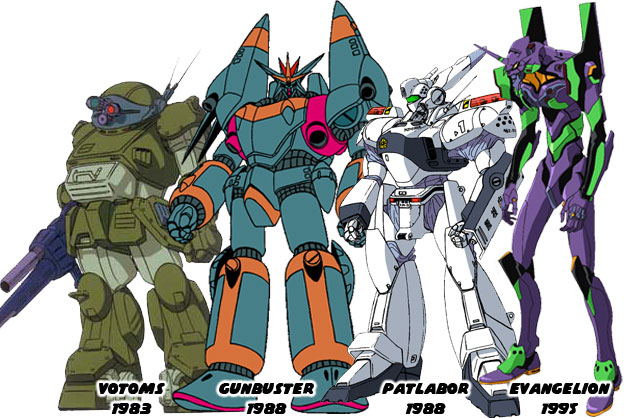 Through the '80s the creators of the robot shows would experiment with the scale and themes of their machines. Some robots were not very large, they were designed for urban combat environments. Some were created as the evolutionary replacement to tanks, such was the case for Armored Troopers VOTOMS, the 1983 series by Ryosuke Takahashi. Other robots were created as the answer to an alien invasion and had to be built on a massive scale with more high-tech weaponry than had ever been seen. This was true for the Gunbuster, a colossal giant robot created in 1988 by Hideaki Anno. that same year a new manga series asked the question of how would we deal with human-controlled robots if they were ever put in the wrong hands? Even something as standard as a construction machine could wreak havoc on a populace. So mecha police officers were introduced in Masami Yuki's Mobile Police Patlabor. Between Gundam and Patalabor the animation studios were allowed to explore all sorts of concepts. The 1983 series Aura Battler Dunbine by Yoshiyuki Tomino had robots that resembled giant beetles. Whereas the 1986 series The Five Star Stories by Mamoru Nagano had robots that resembled paladins and knights.

In the '90s the giant robot trend saw another aesthetic shift. This was due in part to the success of the OVA series Giant Robo: The Day the Earth Stood Still. The episodes debuted in 1992 and showed the industry that retro designs could find an audience as long as the character development and story supported it. About the same time animator Bruce Timm and writer Paul Dini had found success using the same formula with the Batman Animated Series. Years later Kazuyoshi Katayama combined the Giant Robo and Batman animated aesthetics with the series The Big O. The show from 1999 lacked character development and a story and relied more on looks rather than substance. The new Giant Robo broke the mold and allowed creators to go wild with their designs. The Gunbuster designer Hideaki Anno learned from this and went in a direction much different than Gunbuster with the new series Neon Genesis Evangelion. The new robots were rail-thin, enormous and quick, a far departure from the heavy-set Tetsujin 28. The series debuted in 1995, that's right, 20-years-ago! Are you starting to feel old? The evolving designs of these robots did not go unnoticed by the game industry. In the next blog we will explore how they were adapted to early arcade and console titles. As always if you enjoyed this blog and would like to sponsor me please visit my Patreon page and consider donating each month, even as little as $1 would help make better blogs and even podcasts!