The "Til It Looks Right" Club

I didn't always possess the gastronomic awesomeness that you see here before you.
(Yeah, yeah, you can stop laughing now)

There was a time when I didn't cook.
Make that couldn't.  Couldn't cook.

A time when it wasn't so much "watcha want for dinner?" but "what flavor Lipton noodles tonight?"  A time when chicken breasts & cream of mushroom soup mingling in the crockpot was fancy livin'.  A time when adding a can of chili to the Blue Box was being creative in the kitchen.

But one can only eat so much cream of mushroom soup chicken and chili mac.  At some point I said, "This has got to stop."  I'm not sure exactly when or what made me pull my culinary head out of my butt.  And I'm not going to now tell a tale of a wonderful, warm, fuzzy, eye-opening experience.  Heck no.  It was frustrating and annoying.

A lot of people will tell you, if you can read, you can cook.  But most good cooks around here don't use written recipes.  They cook like maw-maw.  They cook from their heads and hearts.  They cook as if possessed by some kind of Zen magic.  That's the kind of food I wanted to cook.  And it's easy to turn off on a wrong winding country road when I don't have a detailed map.  Then I'm lost somewhere in the middle of crawfish ponds and rice fields.  The ingredients to make dinner surround  me, but I don't know where or how to start.

I tried to pry the secrets out of my mother-in-law.
"This is good...how'd you make it?  What's in it?"
"First you brown the chicken.  Drain it if it's greasy, greasy."

I guess it's ok if the chicken is greasy.  Greasy, greasy, however, is unacceptable.

"Then you add some onions and bell pepper..."
"How much?"
"Onions or peppers?"
"Both."
"Oh, enough so it looks right."
Aaaaaaaaaaaaaaagh.

For someone who hates to fail and conducts most things with lab-style precision, "til it looks right" is about the most awful thing you could say.  I'd rather if you just flip me off and be done with it.

I don't know how it happened, but I have become one of these annoying people...a member of the "til it looks right" club.

It started as a trickle when The Husband asked me what I thought about his roux.  I said, "that looks about right."  Oh no.

Then someone asked me, "how long do you cook the fish?"  I couldn't stop myself...just blurted it out.  That annoying, frustrating phrase that has been like finger nails on newspaper to me (finger nails on a chalk board don't bother me--it's newspaper): I cook it til it looks right.

These "Buddah" Beans below are something I wanted to know how to make for a very long time.  But asking people was useless since all I ever got was "til it looks right" and I didn't know what right was.  I tried to duplicate the soft, creamy beans I'd get at local restaurants by cooking them like red beans and rice, but that wasn't right.  It wasn't until I came across a recipe in an old, tattered Cajun cookbook/pamphlet type of thing that I discovered what was right--using fresh or frozen beans, not dried and starting with a roux.

Of course it starts with a roux!  Duh.  No one told me that part because it's a given that I somehow didn't get.  But this "recipe" was almost as bad as talking to my mom or mother-in-law.  The amounts of ingredients were sketchy.  And a note "if you use canned beans, add less water" made me laugh since no amount was given for water in the first place.  It's all highly comical to me now.

Being lima beans, butter beans are also often hated by the masses.  And that's a shame because they can be so creamy and good...


Mise en place for "buddah" beans: flour and vegetable oil for the roux, a small onion, about 1 lb fresh or frozen butter beans, water to cover the beans, salt, pepper, and sugar if you'd like.  Smoked sausage can also be added. 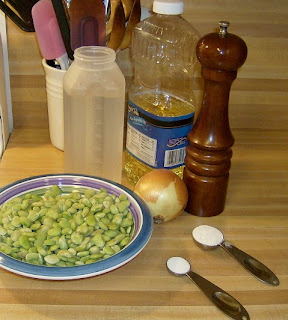 The classic "first, you make a roux."  Why did no one tell me?  Why didn't I just know? 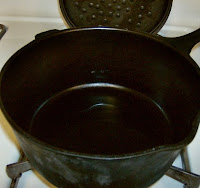 By the way, The Husband inherited this cast iron pot from his grandmother (MaMa).  It has the most well seasoned, smooth surface I have ever seen.
When the roux is the color of peanut butter or caramel, add the onion,  It should be chopped and ready to go before you start the roux.  Since the amount of roux is small, it will cook quickly.
If you're using sausage, add it now too. 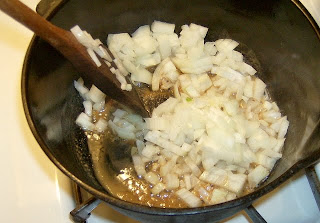 Once the onions soften, add the beans and cook, stirring, until they get tender. 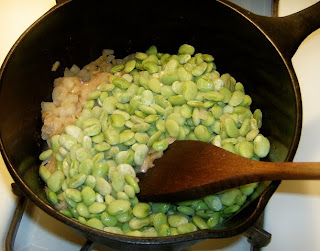 Add enough water to cover the beans.  Season with salt and pepper. 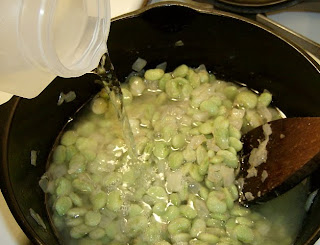 Bring to a boil, lower to a simmer. 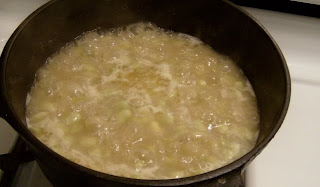 Cook until the beans are very tender and the gravy becomes thick...
you know, til it looks right.

This should take about an hour.  Taste and add more salt and pepper if needed.  If you like, add a few pinches of sugar.
Serve 'em up, but not over rice.  Rich & creamy, just like buddah! 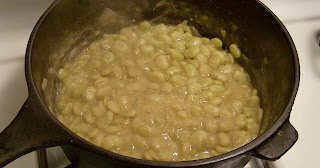 Here a pot with sausage if you can't stand the thought of beans with out pork. 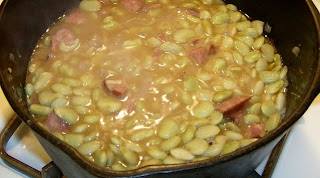 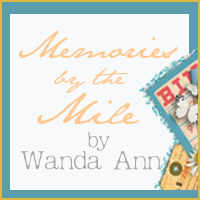 Start by heating the oil. Sprinkle in the flour and make a caramel or peanut butter colored roux, stirring constantly. This small amount of oil and flour will cook quickly.

Add enough water to cover the beans and season with salt and pepper. Bring to a boil, then lower to a simmer. Simmer until the beans are very soft and the gravy is reduced and thick. Before serving, taste for seasoning, adding more salt and pepper if needed. A few pinches of sugar can also be added.

Other ideas:
-Smoked sausage can be added with the onions
-If you like extra kick, Tony’s Creole seasoning and/or cayenne pepper can also be used