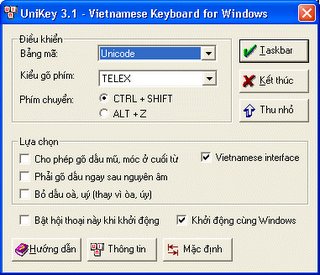 I haven't posted much about keyboards lately so this seems like a good time. This is about the Unikey Vietnamese keyboard which has "all 3 popular input methods: TELEX, VNI and VIQR." (Screenshots)

Not exactly your comment, [that's okay. Michael, this is a blog, remember] but for Vietnamese, I use a non-microsoft keyboard called unikey. It has several options, I use unicode precomposed characters and telex input, a vietnamese system that takes a little getting used to.

Here's a list of some words, with the input on the left, output in the middle and English gloss on the right.

the tone keys (f, s, r, x, j) can be typed either after the vowel or after all the segmental letters of the word have been typed. The latter method is probably better as it assigns the tone marker better in ambiguous cases (but I'm used to writing tone as I go along). It's much faster than when I inputted a 100 or so pages of dictionary entries using keyboard shortcuts of my own devising in a floating accent system that I hate with a passion now (can you say awkward and time consuming and frustrating?)

Thanks, Michael, for explaining this. It sounded a little odd at first but entirely suitable kinesthetically. There is a big difference between just finding all the accents in the first place, and then finding an input method that can be easily typed. I still find French awkward. Especially since I have switched keyboards a few times over the years.

Here is another comment on the Telex input method.

That is also the case in vietnamese "telex style" input. A very popular input method as it allows very fast typing. The vowels with a circumflex, as well as the D stroke, are written by redoubling the letter. Then, unused letters of the latin alphabet (j,x,...) are used to indicate the different accents. But those letters can be typed almost anywhere on the syllabe (vietnamese is written with syllabes separated by spaces). For example "Vietnam" in vietnamese is written with the "e" having acircumflex accent and a dot below the letter. With the telex input method: "Vieejt Nam" but also must be accepted"Vieetj Nam" (yes, the accent is always on the last vowel of a syllable with several vowels).

If you think about how the lettered keys will look as you type, this will throw you off. But think of what will display on the screen instead, as the accents are added either after the letter or after the syllable which they modify, up to you. More intuitive than dead keys and no long finger stretches to the top row.

However, the top row is way better than at the side on the quotation mark key. Some of us have very disobedient pinkies - they never do as they are told - better for drinking tea, really.

Another recommended Vietnamese keyboard is VPSKeys.

For Mark, look at this comment about using telex input for Pinyin. Have you ever seen that?

I'm off for a cup of tea. The power of suggestion!

Unikey telex input is also forgiving in that you don't have to delete wrong accents. If I mistype owr as owf I just add the r after f (owfr) and it corrects the tone. And tone placement is a little tricky in words with, for example, the sequence -oa- as the tone mark goes on either the o or a depending on the final. Typing the tone right after the vowel is less accurate than typing the tone as the final element (which always places it correctly).

Also, of the fine "tone" letters, three are used in Vietnamese, r, x and s are all initial consonants (so their use after vowels is unambiguous).